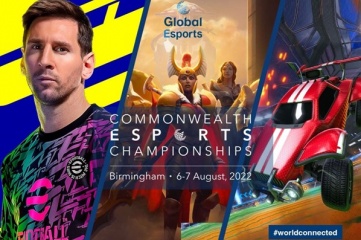 DOTA 2 (Valve), eFootball™ series (KONAMI) and Rocket League (Psyonix) will be featured at the event at the International Convention Centre (ICC) this August 6-7, with all three titles featuring a Women Category and an Open Category.

Showcasing the excitement of the upcoming Commonwealth Esports Championships, students from across the UK played Rocket League during today’s CGF Executive Board Meeting in Birmingham. The demonstration was attended by President of the CGF, Dame Louise Martin DBE and CGF Chief Executive Officer, Katie Sadleir; the President of the GEF Chris Chan and Chair of GEF’s Coordination Commission for the CEC2022, Chester King.

“We are proud to feature some of the world’s leading esports titles on stage in Birmingham’s International Convention Centre (ICC) over the weekend of August 6-7. We look forward to creating the opportunity for players and athletes from across the Commonwealth to shine on a truly global stage at this historic inaugural Commonwealth Esports Championships,” said Paul J. Foster, CEO of the GEF.

"Alongside the GEF, we are delighted to unveil three major titles for the Commonwealth Esports Championships in Birmingham this summer. There is no doubt this innovative and exciting event will create new learnings and opportunities for us to further explore esports. The Commonwealth has a combined population of more than 2.4 billion with over 60% of them under the age of 30. This is a vital group for the Commonwealth Sport Movement to engage with, and esports can be an important part of this work due to its huge popularity and reach with young people across the world,” expressed Katie Sadleir, CEO of the CGF.

“The Commonwealth Esports Championships is a major vote of confidence in the West Midlands’ and UK’s thriving esports industry and an exciting chance to look at how this can be brought into the Commonwealth Sport Movement.”

The Commonwealth Esports Championships will feature exciting demonstrations showcasing Active Esports and the powerful technologies that support the convergence of sport and esports. The Commonwealth Esports Forum – a global convention of diverse thought leaders and idea creators – will be held at the same venue on Friday, August 5, 2022.

The event today comes after first Team Preparation Guide (TPG) meeting for the event was staged last month. The meeting led by the GEF was joined by leaders from the GEF, CGF and British Esports Association. It was attended by representatives from over 60 Commonwealth nations and territories, including the GEF’s Member Federations who are set to compete in Birmingham. The organising team briefed the delegations on arrangements for participants and have since commenced team selections and preparations.

About the Global Esports Federation

The Global Esports Federation promotes the credibility, legitimacy, and prestige of esports. We convene athletes, players, the world’s publishers, developers, industry partners and sporting organizations on one inclusive platform. We encourage and support the connection between esports, sport and technology. Our mission calls for the development of visible initiatives that are in service to the world’s esports community. We are grateful for a collective of strategic partnerships that bring to life this mission. www.globalesports.org

About the Commonwealth Games Federation

About the Business and Tourism Programme (BATP)

The Business and Tourism Programme (BATP) aims to leverage the Birmingham 2022 Commonwealth Games to embed positive perceptions of the West Midlands into the international imagination, driving long-term economic benefits across the region, fostering civic pride. Focusing on tourism, trade and investment, the three-year programme will catalyse the West Midlands’ growth strategy, cementing the region, and wider UK, as a globally sought-after location to visit, invest and live in. Its work will focus on nations and territories across the Commonwealth.