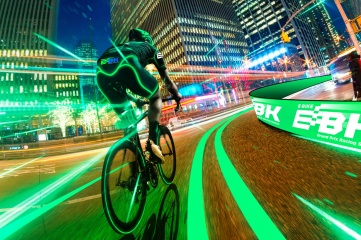 EBK GP is the world’s first international E-Bike race series which will be delivered as part of a robust sustainable transformative mobility programme in each city. The concept is owned and developed by Cube International. Due to begin in late 2022 with a showcase event in Dubai, the series will take place in 10 cities around the world across 2023. Each Grand Prix will highlight iconic landmarks and cultural sites in host cities as part of a high-speed, thrilling sporting spectacle.

All EBK GP races will be free for public viewing, and coverage of the events will be broadcast internationally via television and digital media through the series’ partner, Sunset+Vine.

“Sunset+Vine provide the E-Bike GP Series with the perfect solution for event production, live broadcast and programme distribution, drawing upon their diverse and considerable expertise in live events and their major sport experience,” Andy Moss, CEO of Teams & Franchise at EBK GP and founder and chairman of Cube International told Host City.

“Our broadcast and media programme is a crucial asset of the EBK GP Series,” Judith Rowan, Global Host Cities Director with EBK GP and International Project Director at Cube International told Host City. “It not only offers a platform for engaging with and entertaining a global audience, but importantly it also allows us to tell the stories of our host cities through the inspirational lens of a major sporting event.”

“As this is a new event, we have a chance here to start with first principles,” said Andrew Preece, Executive Director of Sunset+Vine told Host City. “We have innovative ideas about AR & VR and how we link together the first and second screens in real time.”

The first screen is the TV or device where audiences watch the primary coverage, with the second being another device such as a phone or tablet where they watch surrounding content such as social media at the same time.

Sunset+Vine first had the opportunity to trial some of these techniques during the INEOS 1:59 Challenge in October 2019, when Eliud Kipchoge became the first person to achieve a sub-two-hour marathon. The wide range of content they produced included a gallery of photos of training during the live event.

“When watching a live sporting event, quite often it’s good to have a deeper insight into the players and the equipment, which you can’t really show as part of live coverage,” said Preece. “We can show it to them on another device so they can get a deeper insight without compromising coverage of the sporting event, and to link it events that are happening within the race.”

Another advantage of working with a new event is the infrastructure can be designed with content production in mind.

“When the event company is designing the race track, we’ve got an opportunity to integrate with them on elements that work for broadcast and to incorporate the camera plan,” said Preece. “For example, we can mount a camera on a turn on a place that it would be otherwise dangerous to film. This way, we can design the coverage without distracting the players.”

Unusually, Sunset+Vine’s output extends far beyond the broadcast feed, acting as a one stop shop for all content, from live to news to social and digital.

“We are unique in the sector in offering 360-degree services – rights sales, programme distribution, live production, shoulder production such as highlights and previews, news on TV and digital, general digital and social and audience development, for example building fan bases on social platforms.

“As events like this are being viewed in more ways on more devices our 360-degree service is increasing useful to organisers, as they don’t have to employ lots of different agencies.”

In keeping with EBK Grand Prix’s mission to help create cleaner, greener healthier cities, Sunset+Vine are minimising the footprint of their work.

“Sport has the power to inspire and motivate,” said Rowan. “Media broadcast multiplies that impact. EBK’s mission is to effect change towards sustainability around the world, and our partners Sunset+Vine have the experience and prowess to harness broadcast’s full potential to help us do that.”

Following the confirmation of Dubai as a host in October, South Korea was announced as the second host country in December 2021. Global sports and entertainment company Collinder Holdings will work closely with the South Korean government on delivering the race series there.

“We are very excited to join the E-Bike Grand Prix series, promoting technology and sustainability,” said Sara Kim, Chief Executive Officer of Collinder Holdings. “South Korea is one of the global leading battery manufacturers and the EV market rapidly growing E-Bike is just the right fit for Korea”.