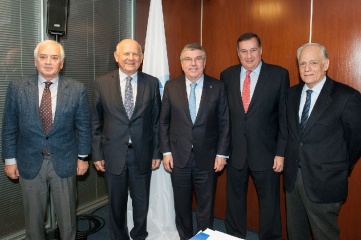 [Source: EOC] The European Olympic Committees (EOC) on 26th January held its first meeting of the year, with IOC President Thomas Bach in attendance. The meeting’s key outcome was the appointment of Spyros Capralos as Chair of the EOC Coordination Commission for the second edition of the European Games in 2019 in Minsk, Belarus.

EOC Acting President Janez Kocijančič opened the day’s proceedings in Lausanne by welcoming President Bach and thanking him for his guidance of the Olympic Movement throughout 2016. President Bach then gave an update on the IOC’s latest activities, especially in the area of anti-doping, and answered questions from Executive Committee members.

EOC Acting President Janez Kocijančič said: “It was a great honour to have IOC President Bach attend our first meeting of 2017 in the Olympic capital. President Bach provided a full update on all current key issues from across the Olympic Movement and, in response, the EOC Executive Committee expressed our unanimous support for the IOC’s handling of the completed McLaren Report concerning doping in Russia.

“The IOC’s approach on this matter – which was consistent with its approach towards Russia’s participation in the Olympic Games in Rio – respects the rule of law in a fair and objective way and the EOC fully supports this.”

Capralos’s appointment as Coordination Commission Chair for Minsk 2019 was then confirmed by unanimous approval from Executive Committee members. Capralos, the President of the Hellenic Olympic Committee, is taking on the same role he occupied from 2013-2015 for the inaugural European Games in Baku, Azerbaijan.

On Capralos’s appointment, Kocijančič said: “Spyros’s chairing of the Baku 2015 Coordination Commission was very impressive and we are delighted that he is able to continue in this role for Minsk 2019. We are very excited that preparations for the second European Games are gathering speed in Minsk.”

The first Coordination Commission visit to Minsk is expected in the spring.

EOC Coordination Commission Chair for Minsk 2019, Spyros Capralos, said: “I am very happy to be taking on this responsibility once again. The Coordination Commission has a vital role to play in shaping the final concept of the European Games and my work starts with immediate effect. My commission members will make sure that the EOC’s experience of delivering Baku 2015 is passed on to the Minsk 2019 European Games Organising Committee in the best possible way.”

EOC Acting President Kocijančič praised the Turkish Olympic Committee and the Erzurum 2017 Organising Committee for their hard work in staging the event just two years after agreeing that Erzurum would host the event in 2017 rather than in 2019, as had been originally agreed.