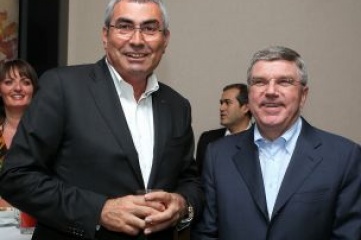 The presidents of many Olympic international sports federations say the views of SportAccord’s president do not represent their own, as three federations withdraw from the union and Vladimir Putin calls for harmony

The leaders of 17 international Olympic sports federations have signed a letter saying statements made by SportAccord president Marius Vizer yesterday do not represent their views.

In his opening speech at SportAccord Convention in Sochi on Monday, Vizer criticised the IOC for not acting in the interests of sports federations. IOC president Thomas Bach then denounced this criticism and the leaders of 17 Olympic sports federations have been quick to rally behind him.

“We the undersigned members of the SportAccord Association are expressing to the SportAccord leadership our disagreement on the opinions expressed this morning by the SportAccord president during the opening speech, which do not reflect the views of the international federations,” the letter said.

“We also express our strong support to the International Olympic Committee and to the Olympic Agenda 2020, which has been adopted under the leadership of the IOC president Thomas Bach in consultation and agreement with all the international federations.”

The signatories, from just under half of all the 35 Olympic sport federations, represent some of the most influential names in world sports, including Sepp Blatter, president of FIFA and IOC member; Ugur Erdener, president of World Archery and an IOC board member; Bernard Lapasset, the president of World Rugby who ran against Vizer for SportAccord presidency in 2013; and Lamine Diack, president of IAAF.

In a letter sent to Vizer yesterday, the secretary general of World Archery, Tom Dielen said: “We hereby declare that the World Archery Executive Committee based on what happened this morning at the General Assembly took the decision to suspend our membership of Sportaccord until further notice with immediate effect.

“We will put this on the agenda of our next Executive Board in July 2015 for a final "decision.

“We will discuss with Sportaccord – DFSU unit on what this means with our current contract but in the interest of both organisations, we suggest that the contract is ended at the end of this year.”

Amid the turmoil, Vizer was re-elected unopposed as president of SportAccord. In an address to the SportAccord Convention, Russian president Vladimir Putin congratulated Vizer, saying “Russia has worked very well with SportAccord and we are happy that the election has taken place in our sports capital.

“Sochi has given us the platform to organize big events and exhibitions. I hope that you will have a chance to enjoy all that is on offer,” president Putin told delegates.”

In a call to heal the rift between the IOC and SportAccord, Putin said: “Let me emphasise that the support of SportAccord and IOC means a lot to us. We will continue to work together and promote peace and sport. I am convinced that the sports movement should be united and not divided by contradictions.”

It was also confirmed that the SportAccord Convention will take place again in Sochi next year. Vizer said “I thank all stakeholders for participating in the Convention this year. Next year we hope to organise logistics better with chartered flights for participants from European destinations."