Home
»
News
»
SportAccord Convention 2017 is a runaway success in Aarhus 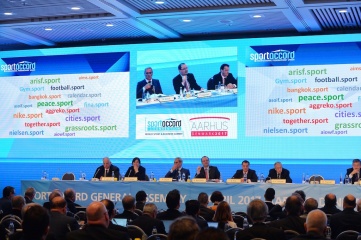 SportAccord Convention 2017, which took place in this year’s European Capital of Culture, Aarhus, Denmark from April 2-7, was billed as a runaway success.

With more than 1,600 delegates in attendance representing 71 nationalities, including 100 International Sport Federations and Associate Members, the 15th edition attracted key decision-makers from the world of sport.

With sport being the fastest growing sector in the entertainment industry, the six-day Convention included a full conference programme focused on ‘Innovation in Action’. This included the Plenary keynote from Michael Evans, President of Alibaba Group, City Day, MediaAccord and LawAccord, as well as a sell-out exhibition with 66 booths representing some of the international federations, cities and many industry sectors.

SportAccord Convention also received a royal visitor with Frederik, Crown Prince of Denmark and heir apparent to the throne who visited the exhibition, as well as legendary goalkeeper Peter Schmeichel who greeted delegates on the Sport Event Denmark stand.

This year saw 135 cities and regions attend the SportAccord Convention who brought more than 300 delegates between them, including the 2024 bid cities who delivered introductory presentations at the ASOIF General Assembly.

“In the last few days, we have also had meetings with 15 cities interested in hosting future conventions from Asia, the United States of America, the Middle East and Europe. This confirms how relevant SportAccord Convention is for the international sports community.”

The glittering opening ceremony organised by this year’s Convention hosts was attended by more than 850 delegates. Held in the Musikhuset, the event featured culture, music and the performing arts, as well as speeches from the presidents of SportAccord Convention and the International Olympic Committee, and the Mayor of Aarhus.

The 16th edition of the SportAccord Convention was announced by Deputy Prime Minister Tanasak Patimapragorn and will take place in Bangkok, Thailand from April 15-20, 2018 and H.E. Mrs. Kobkarn Wattanavrangkul, Thailand’s Minister for Tourism and Sports was also in attendance with her delegation.

The closing event took place in the iconic art museum of ARoS where hundreds of guests enjoyed panoramic rainbow views of the city, exclusive access to the new exhibition ‘The Past’, and cocktails and tapas accompanied by live music.