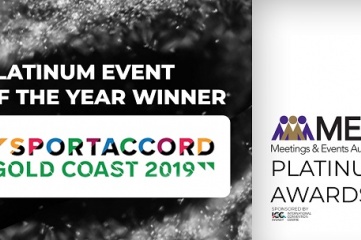 SportAccord 2019 was selected as Platinum Award winner for Best Event in Australia at the 2019 Meeting & Events Australia (MEA) and also scooped the overall Government Event of the Year and Queensland’s Event Legacy Award. The winners were announced at the MEALIVE 2019 Award virtual event held at ICC Sydney Studios.

Coming just a year after Gold Coast became the focus of the sporting world when it staged the 2018 Commonwealth Games to great acclaim, SportAccord 2019 benefited from receiving the full support of the Queensland Government via Tourism and Events Queensland (TEQ) as it welcomed over 1700 delegates to the Gold Coast Convention & Exhibition Centre last May.

The 2019 edition of sport’s most important annual gathering featured multiple high-profile networking events, a three-day exhibition, and more than 50 conference sessions with over 100 speakers and panellists from the worlds of sport, business and politics, including H.E. Ban Ki-moon, the former United Nations (UN) Secretary General.

SportAccord and GAISF President Raffaele Chiulli said: “We are grateful that SportAccord 2019 has been recognised by Meeting & Events Australia for what was such a productive and enjoyable week in Gold Coast, Queensland. The recognition only solidifies the value of hosting SportAccord to cities, regions and countries and the legacy impact of our event.”

“The awards are a testament to the dedicated work of the local organisers and the incredible contribution of Tourism and Events Queensland (TEQ) and the partners, suppliers and volunteers who made SportAccord’s first visit to Oceania such a success. The Gold Coast and Queensland were a magnificent host and its people truly embraced the event.”

The next edition of the SportAccord World Sport & Business Summit will take place in Ekaterinburg, Russia from 23-28 May 2021.

As the only global sports industry event attended by all International Sport Federations and their stakeholders, SportAccord brings together organising committees, hosting cities and regions, governments and administrations, rights-holders, agencies and athletes, as well as top-level experts and organisations from the sports media, technology, investment, medical and legal sectors.

Registration is open now for SportAccord World Sport & Business Summit 2021, which will be held at the IEC Ekaterinburg-Expo convention centre. Organisations can become an official partner or exhibitor and discuss these investment opportunities with sales@sportaccord.sport. Follow developments and updates via Twitter @sportaccord and keep up-to-date via LinkedIn and Facebook, YouTube and Flickr.