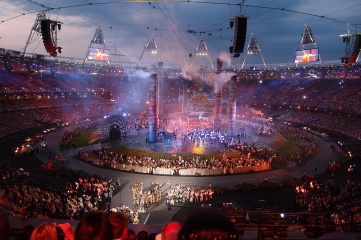 Rehearsal for the opening ceremony of the 2012 Olympic Games in London (Photo: Matt Lancashire)

LA2015, the organising committee for the 2015 Special Olympics World Games, has selected local company FiveCurrents to produce their Ceremonies

An LA-based company has won the contract to be the official executive producer of the opening and closing ceremonies of the 2015 Special Olympic World Games, which take place in the city next summer.

The work was awarded through a competitive bidding process on the back of FiveCurrents’ experience working on 12 Olympic Games, four Paralympic Games and nine major multi-sport events over the last 25 years.

“Having produced the Opening Ceremonies of back-to-back Olympic Games, we are looking forward to bringing the world together to celebrate another once-in-a-lifetime moment of international pride right here in our home state and country,” said Scott Givens, president of FiveCurrents.

Most recently, FiveCurrents worked on the Sochi 2014 Olympic Opening and Closing Ceremonies. They were also the production company behind Danny Boyle’s celebrated London 2012 Olympic Opening Ceremony and will also be working on the European Games in Baku next year.

80,000 spectators are expected to attend the Opening Ceremony at the Los Angeles Memorial Coliseum on Saturday, July 25, 2015. The ceremony will be broadcast live and distributed internationally by ESPN, the Official Broadcaster of the 2015 Special Olympics World Games.

The opening ceremony will put the athletes at the centre of the celebrations, with the final leg of the “Law Enforcement Torch Run” culminating in a Parade of Athletes and the lighting of the Special Olympics cauldron.

“We are looking forward to creating the stage that will celebrate the courage, determination and joy of our athletes,” said Patrick McClenahan, President and Chief Executive Officer of LA2015. “With the support of FiveCurrents, we will welcome the world as we cast a spotlight on acceptance and inclusion.”

The 2015 Special Olympics World Games will run from July 25nd until August 2nd. With 7,000 athletes representing 177 countries, the event can claim to be the “largest sports and humanitarian event anywhere in the world in 2015, and the single biggest event in Los Angeles since the 1984 Olympic Games.”

Los Angeles is vying against Boston, San Francisco and Washington DC to become the US Olympic Committee’s candidate for the Olympic Games in 2024, a decision on which is expected to be made early in 2015.