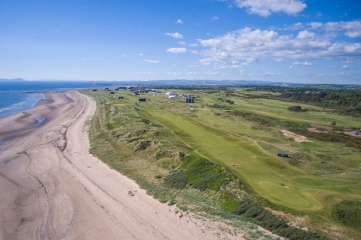 Sky Sports won the award for best sports production for its enhanced coverage of the championships.

Sky Sports’ innovative coverage of The 145th Open at Royal Troon in July 2016 has earned them a BAFTA after being named best sports production during the awards ceremony in London.

The Sky Sports team won the award for best sports production for their enhanced coverage of the championships, including the thrilling climax when Henrik Stenson and Phil Mickelson were embroiled in a sensational final-day battle watched by hundreds of millions of people around the world.

The Open was named the winner ahead of BBC's coverage of the Rio Olympics and the Six Nations clash between England and Wales, while the Paralympics on Channel 4 was also nominated.

Paul Bush OBE, EventScotland director of events, said: “This is a tremendous accolade, not only for the team at Sky Sports but for golf in general to have beaten off competition from so many top-class sporting productions. It is also a triumph for the stunning Ayrshire coastline which provided the perfect backdrop for the high-class drama that unfolded on the course.

“I’m especially delighted for our golf events executive Katy Mathieson, who was part of the Sky Sports team producing coverage from Royal Troon before joining EventScotland last year. We have a great relationship with Sky Sports through the world-class portfolio of golf events taking place in Scotland and we look forward to working with them on many more in the coming years.”

The EventScotland team work across Scotland’s extensive golf portfolio, which includes the men’s and ladies Scottish Opens at Dundonald Links in Ayrshire and the RICOH Women’s British Open at Kingsbarns in Fife among others this summer. The Open also returns to Scotland in 2018 at Carnoustie.