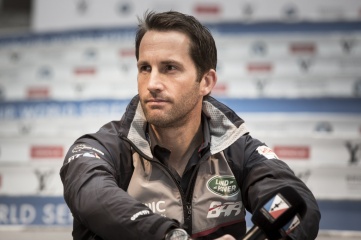 [Source: SportAccord Convention] Sir Ben Ainslie, four-time Olympic Gold Medallist & Team Principal, as well as Skipper of Britain’s America’s Cup Challenger, Land Rover BAR, will give the keynote on 8 November 2017 at the eleventh edition of the International Federation (IF) Forum focused on Sustainability.

Speaking ahead of this year’s event set to take place from 8-10 November at the Hotel Royal Savoy in Lausanne, Switzerland, Sir Ben Ainslie shared the following thoughts:

“It’s great that a flagship event like the International Federation (IF) Forum is focusing specifically on sustainability. Sports teams represent key role models in society and there is an opportunity for all sports teams to become truly sustainable businesses. At Land Rover BAR, we believe our influence should extend far beyond the race course, we look to educate and inspire to drive sustainability forward instinctively.”

This year’s IF Forum conference: ‘‘International Federation Impact - Leading the way towards a Sustainable Agenda’ will include Welcome Remarks from Thomas Bach, President of the International Olympic Committee, and Philippe Leuba, State Councillor Department of Economy and Sport, Canton of Vaud.

Patrick Baumann, President of GAISF and SportAccord Convention will deliver the Opening Address to leaders of the international sports federations and discussed the significance of this year’s theme on Sustainability:

"Avery Brundage, 5th president of the International Olympic Committee once described sport as ‘an international phenomenon like science or music’ and he was right.  Sport has significant influence to shape the way people think about issues such as sustainability which is central to the future of our planet. As leaders of International Sports bodies we have a responsibility to use that influence by ensuring promoting sustainability and ingraining best practice into our events and operations.”

Marie Sallois Dembreville, Director of Corporate Development, Brand and Sustainability, IOC, will lead the Welcome and Opening Remarks on Thursday 9 November, and outline the objectives for the IF Forum, as well as the importance of implementing a common strategy.

The IF Forum conference will focus on infrastructure and natural sites, sourcing and resource management, climate, mobility, and workforce. The programme is a collaboration between the International Olympic Committee and all International Federations, and hosted by the SportAccord Convention team.

An additional speaker will be presented by IKEA.

Panel sessions will be led by David Eades, Anchor and Journalist, BBC World who will also serve as Master of Ceremonies for the IF Forum 2017.

The IF Forum is for international sports federations, speakers and official IF Forum partners by invitation only.