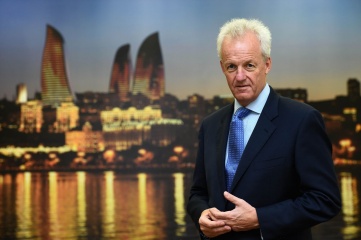 Dubai Expo 2020 has appointed Simon Clegg as Chief Operating Officer, the title he also held for the Baku 2015 European Games.

As a speaker at Host City 2015 in November, Clegg shared his experiences of organising the inaugural European Games in Baku.

He led a team of 2,500 full time staff, supported by 12,000 volunteers, to deliver a mega event in an unprecedented compressed time frame and broadcast to an estimated 832 million households.

This is the first time Clegg has been appointed to run a major non-sports event.

“I am very excited about joining the team at Expo 2020,” said Clegg.

“The vision and ambition of the project will make it a stunning experience for the expected 25 million visitors, 70% of whom will come from overseas.

“Within each country's pavilion visitors will be able to experience the rich diversity and culture that makes up our planet as well as seeing the latest technological developments around each of our chosen themes.

Clegg’s previous roles include managing Team GB at Beijing in 2008 – its most successful Olympic Games in a century – and leading the campaign to persuade the British government and Mayor of London to bid to host the 2012 Olympic Games. He was subsequently appointed a board member of the London 2012 Olympic Games bid and Organising Committees.

“I am delighted to have someone of Simon's caliber, leadership skills and considerable management experience of large global events join our team,” said Expo 2020 Director General and UAE Minister of State for International Cooperation, Her Excellency Reem Al-Hashimy.

“His management and commercial skills will strengthen our team and help ensure the successful delivery of our 1,082 acre site. I look forward to working with him on this hugely important event for Dubai, the UAE and the entire region.”