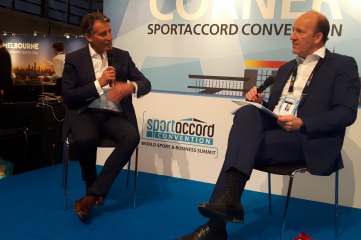 Free from national interest, the Athletics Integrity Unit will enable a swifter response to doping and other issues, says IAAF president Sebastian Coe

IAAF president Sebastian Coe believes the creation of the new independent Athletics Integrity Unit (AIU) will not just benefit competitors but also puts policies in place to combat any threat to the sport’s ethics.

Launched at the SportAccord Convention, the AIU will be chaired by David Howman and replaces the IAAF’s former anti-doping department. It will manage activities including education/prevention, testing, intelligence gathering, investigations, results management, prosecutions and appeals.

The AIU’s focus will not only be on anti-doping but will also address integrity breaches in other areas of concern such as bribery and corruption, betting, the manipulation of competition results, age manipulation and misconduct around transfers of allegiance.

Coe said that from now on athletes must be the centre of the sport and the framework for the AIU will provide them with a “safer ecosystem”.

Coe added: “It’s really important in a sport that has 214 federations that the ultimate goal is not just to make your headquarters safer or the academic process of putting corporate governances in place. They have to have practical applications through area associations, in our case the continental associations, and then it’s got to have an alignment, an impact and practical support to the 214 federations.

“This will take time but we needed a constitution that was both fit for purpose and can deal with not just one or two issues but for the first time we will have a unit that can deal with all these problems.

With the launch of the AIU, the sport is putting systems in place to safeguard its future off the track. But with the introduction of events such as Nitro Athletics, Coe says that innovation must also happen on the track if the sport is to survive.

Not seen as an event for the purists, Nitro Athletics was headlined by sprint king Usain Bolt and is a team-based competition that combines strength, endurance, power and extreme energy.

What did Coe think about the Nitro Athletics spectacle held in Melbourne in February? “It’s very simple, you innovate or you die,” he said. “If sport is our activity then our business is entertainment. We haven’t adapted [to the modern world] as well as we should have done.

“What I liked about Nitro is it’s not that you are suddenly in the World Championships in London or the [Olympic] Games in Tokyo going to see elimination miles, power plays or mixed relays, but there were clues there as to why young people felt more engaged in what they were watching.

“Yes, sometimes that will be uncomfortable for the purists.”