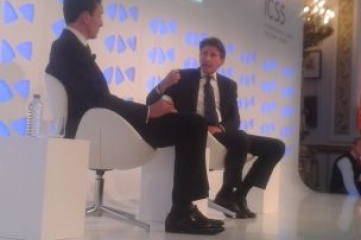 Lord Coe, elected as IAAF president by 56 per cent of member federations, said the organisation has a chance to review and renew itself

Sebastian Coe said the IAAF presidential election campaign, through which he received 115 (56 per cent) of the votes of 207 member federations, has created an opportunity for the organisation to renew itself.

Lord Coe will take up the presidency of the International Association of Athletics Federations (IAAF) at the close of the IAAF World Championships in Beijing on 31st August.

The second candidate, Sergey Bubka received 92 votes and was elected as vice president.

“I’m very flattered, very, very honoured to have been elected president,” Coe said at a press conference after the election on Wednesday.

"You have a president that will devote himself full-time to the IAAF. It has been a long and hard campaign but it has given us the chance to pause for breath, the chance to review and renew itself," added Coe.

The presidential election comes at a time of great pressure for the organisation as it faces allegations of widespread doping within the sport.

On 2 August, the Sunday Times and German broadcaster ARD reported that IAAF data leaked by a whistleblower showed that a third of medals won in endurance events from 2001 to 2012 were awarded to athletes who had recorded “suspicious” blood tests.

The IAAF dismissed the reports as “sensationalist and confusing”, pointing out that the results did not refer to positive tests, but the questions are still being raised of the federation, with the Sunday Times alleging on 16th August that the IAAF blocked publication of the data.

As an Olympic medallist and former chairman of London 2012 and vice president of the IAAF, Sebastian Coe brings a wealth of experience to the organisation’s leadership.

"We have a man who has devoted his life to the sport," said outgoing president Lamine Diack, who has held the presidency since 1999.

Coe paid tribute to Diack, saying "Lamine has left us with an extraordinarily strong foundation and one aspect of that foundation is that we are a truly global sport. I will do my best to continue from those firm foundations

"In 2001 and 2002, I sought the advice of Lamine Diack about playing a greater role in the sport and in 2003 I became a Council member. In 2007 I sought his advice again before I became a Vice President.

"It has been an apprenticeship that has helped me understand greater the balances and nuances within the sport.

"I want to thank the (member) federations but I also want to thank those that cover and broadcast our sport. We tend to forget that the media is most potent sponsor of our sport; and I will maintain my chairmanship of the media committee.”

“This has been a good day for European athletics,” said Svein Arne Hansen, president of European Athletics.

“I am very pleased for all the European representatives elected to the IAAF Council. I call on them to work hard and cooperate with the members from the rest of the world for the good of our sport.

“There are a lot of urgent issues to address over the coming years, including the integrity of the sport, our competition programme and development.”