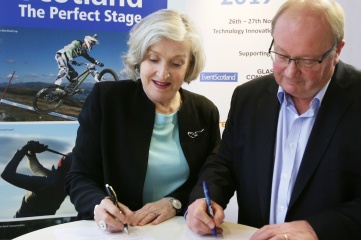 [Source: EventScotland] EventScotland and Tourism and Events Queensland (TEQ) have signed a Memorandum of Understanding (MOU) during a meeting between the two organisations at Host City 2019.

The sixth Host City Conference and Exhibition was the ideal place for the signing of the agreement as 300 representatives from some of the world’s leading event cities, destination marketing organisations, cross-sector rightsholders, organising committees and suppliers gathered together for two days. The conference and exhibition included plenary presentations, panels, VIP dialogues and workshops on how to attract, bid for and host secure and engaging events with positive long-term legacies. The MOU will see EventScotland, part of VisitScotland’s Events Directorate, and TEQ work in collaboration over the next three years, sharing information and insights into the securing and delivering of major sporting, cultural and business events.

It will also build on the strong relationship both Scotland and Queensland developed during their respective hosting of the Commonwealth Games in 2014 and 2018 as both organisations look to build meaningful social and economic impacts for their country and region through event tourism.

Paul Bush OBE, VisitScotland’s Director of Events, said: “Scotland is the perfect stage for events and our reputation as a world-leader in event delivery has seen us secure and deliver some of the world’s biggest events, including The 2019 Solheim Cup and the inaugural UCI Cycling World Championships in 2023.

“Events play a key role in our society by helping to bring strong social and economic benefits to the whole country. We are delighted to be signing this MOU with TEQ that will allow both organisations to flourish through the regular sharing of knowledge and insights into this incredibly dynamic and exciting industry.”

TEQ CEO Leanne Coddington said the partnership would prove beneficial to both parties.

“We’ve worked incredibly hard over the past decade to build Australia’s most diverse events calendar that sees unique events held in Australia’s best destinations from the Gold Coast to Cape York and the Outback,” Ms Coddington said.

“Events not only drive visitors to Queensland but also contribute strongly to the economy in their own right, whether they be large-scale sporting events, business events, cultural events or community events.

“We look forward to collaborating with EventScotland in the coming years as we continue to build the value of the It’s Live! in Queensland calendar.”

The signing of the MOU also comes at an exciting time as recruitment for key positions to oversee and deliver the 2023 Cycling World Championships will shortly commence.

Paul Bush added: “It has been an exciting year for the events industry, especially for us here in Scotland. During my opening keynote address on day one of Host City 2019 I touched on the impact of three aspects on the events landscape this year – the growth of women’s sport and women’s events; contingency planning; and audience engagement.

“Unlike any other year I believe we have seen the tectonic plates of the world sporting events shift, collide and indeed, totally reshape. We have seen record crowds and TV audiences for major international events including The 2019 Solheim Cup at Gleneagles and the Women’s World Cup in France.

“We’ve also seen pay parity and equality and diversity continue to be topical subjects and while we’ve seen great strides in the last 12 months, there is still much work to be done within the equality and diversity agenda as sport still lags society.  As an events industry we can and should take a lead whether its gender balance, LGBTQ, BAME or disabled representation; providing the platform for all people from the field of play right up to the boardroom.

“The year has also raised a number of interesting scenarios within the area of contingency planning. While some organisers like the Cricket World Cup got it spot on, others did not, and it is an area we need to focus our minds and give further consideration to ensure we are not left wanting.

“We have also seen a seismic change in audience and fan engagement, with some events like World Athletics Championships failing to ignite the interest of locals, leaving stadiums unfilled while others like the Women’s Netball World Cup in Liverpool and England women’s football team’s recent match against Germany playing to sell-out crowds.

“With the world changing at a rate of knots, as an industry we need to respond at the same pace to the many variables that now exist.”