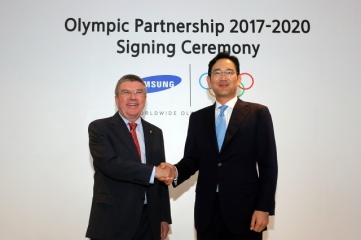 Consumer electronics conglomerate Samsung has extended its Olympic partnership with the IOC through to 2020, at a signing ceremony at the Nanjing Youth Olympic Games.

Samsung has been a part of IOC Worldwide TOP Programme since the 1998 Nagano Winter Games and the extension means the South Korean firm will now feature as a supporter of the Rio de Janeiro, PyeongChang and Tokyo Games as well as the Youth Olympic Games through to 2020.

IOC President Thomas Bach said: “We are delighted to be able to continue our partnership with Samsung. The funding generated by the TOP Programme directly supports the staging of every Olympic Games, as well as every one of the National Olympic Committees, enabling athletes from all over the world to prepare for and compete at each Games.

Samsung will be the official Worldwide Olympic Partner in the Wireless Communication Equipment and Computing Equipment category and has previously provided the Olympic Games with its wireless communications platform and mobile phones, most recently at the Sochi 2014 Winter Games.

“Samsung also supports the operations of each Games by providing leading wireless telecommunications and technology equipment,” said Bach. “In addition, Samsung’s technologies and global marketing reach will engage fans around the world with the Olympic values and the Olympic Movement.”

Samsung said in a statement: “As mobile technologies have become an inseparable part of our daily lives, Samsung believes its continued support will play a significant role in bringing further innovation to the staging of the Olympic Games.”

The new deal means all of the existing Olympic TOP partners have committed to the programme through to 2020. Other companies to sign up to the IOC’s Worldwide TOP Programme include Coca-Cola, Atos and Panasonic who have similar deals, with each covering their own area of expertise.