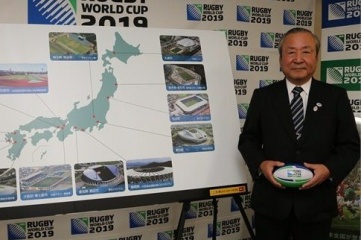 Hosting the Rugby World Cup and the Olympic Games within the space of a year is a great opportunity for Japan but selling tickets for both will be a challenge, says the CEO of Japan Rugby 2019

Hosting two of the world’s three biggest sports events within the space of a year will is not just a practical and logistical challenge for Japan.

The organising committees of both events will rely on robust ticket sales to cover the costs of delivering the events and, according to the CEO of Japan Rugby 2019, the proximity of the two events will make this a big, but achievable, challenge.

The 2015 Rugby World Cup takes place in England and Wales, the birthplace of the sport, and is widely anticipated to be the most commercially successful yet.

The 2019 World Cup is also a huge opportunity for Japan. According to Gilpin, local interest in the event is stronger than a Football World Cup would have presented.

But the head of the organising committee expressed concerns that a smaller rugby culture and the Olympic Games in 2020 might both impact negatively on the potential for ticket sales in Japan 2019.

“There are different challenges facing us in Japan,” said Akira Shimazu, CEO of Japan Rugby 2019. “Specific challenges include the fact that Japan is not a rugby heartland, so we might struggle to sell some tickets.

“We are also selling tickets for the Olympic Games at same time, so we want to make sure we are not making people choose between one and the other. Having said that, I am convinced we can fill up those seats.”

Shimazu stressed that the organising committees of both events are working very closely together in Japan, rather than in competition.

Gilpin also pointed out the cost of hosting the Rugby World Cup is not comparable to the Olympic Games. “We are not asking candidates to invest in major infrastructure projects,” he said.