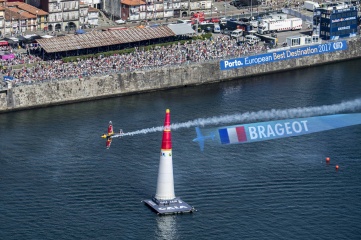 The Red Bull Air Race explains how its technology brings the sport, and the cities that host it, to the public

Since its first race in 2003, the Red Bull Air Race has been on a tireless quest to bring its unique aerial action into the ranks of the world’s most advanced sporting events. Fifteen years later, that mission has been achieved, and the sport’s development keeps advancing by leaps and bounds.

The Red Bull Air Race World Championship uses state-of-the-art technology not only to develop the sport itself – but also to provide an exceptional experience for spectators on the ground and viewers watching worldwide. Already, customization with the latest aviation technology has brought the powerful single-seat raceplanes to an unprecedented level of advancement, while high-tech timing and judging equipment, along with thoughtfully crafted revisions to the race format and rules, make the sport a can’t-look-away event. And the introduction of a second competition category, the Challenger Class, literally brings pilots up to speed, so that they inspire the best from the best when they join the top aviators at the World Championship level.

And then there are the technical innovations that take the sport even closer to the fans. At the forefront of technology, the Red Bull Air Race live TV product has helped the sport reach a massive audience and captivates a constantly expanding fan base around the globe, while mixed reality and virtual reality enable followers to share the experiences of their heroes.

Here are just a few examples of how the Red Bull Air Race has brought a new dimension to motorsport.

One of the major factors in the technological progression of the Red Bull Air Race is telemetry data. What is telemetry? Very generally, the term refers to automated collection and transmission of data for monitoring purposes. Today, each of the raceplanes is equipped with more than 40 different sensors that report everything from airspeed and G force to critical engine measurements like RPM and fuel flow. This data allows teams to get insights on the best race lines and their own raceplane performance, which in turn inspire new training options and provide the basis for developing raceplane modifications and tactics through the racetrack. Telemetry data also makes judging more precise, enhances safety and, ultimately, improves the race performance of every team, for breathtakingly tight finishes in the riveting aerial showdowns.

Telemetry data is also an important contributor to the fascination of watching the race live on TV. Red Bull Air Race TV products reach a huge fan base around the world. Broadcast online and brought to 177 countries via broadcast partners, these TV productions open the motorsport to an ever-increasing base of dedicated fans, as well as new viewers who simultaneously discover the motorsport and the cities that host it from the comfort of their homes. In order to further enlarge these numbers and bring the action closer to audiences than ever, the TV production team utilizes state-of-the-art of technology and works with leading-edge collaborators to constantly develop and improve the viewing experience.

Perhaps the best example of how technology heightens audience engagement with the live TV shows is the Ghost Plane, a product based on telemetry data that has no equivalent in traditional sports broadcasting. While current conditions prohibit having raceplanes in the track simultaneously, the Red Bull Air Race can create that thrilling sensation through the use of a virtual plane – on live TV as well as on jumbo video screens onsite – that allows them to “see” two raceplanes flying head-to-head. The Ghost Plane is an augmented reality product that enhances the real camera picture with computer-generated content, developed specifically for the Red Bull Air Race. A positioning system, mounted in the fuselage of each raceplane, broadcasts the precise position of the aircraft to a ground base station, where an accurate graphic overlay of the flight is created in 3D. Then, when another competitor is racing in the track, the overlay is added, showing the position of the real raceplane and the virtual opponent in the track at any point during the run – in real time. The Ghost Plane was a hit with audiences when first introduced in 2015, and has evolved to be even more compelling in the seasons since.

In addition to developing its own technological prowess, Red Bull Air Race collaborates with leading technology companies, such as Microsoft and Google, to produce technical innovations that draw the fans right into the action to immerse themselves in the sport – even when they are at home. Two examples are the FlightDeck with HoloLens and the Red Bull Air Race LIVE VR experience on Daydream, both based on the live streaming of the data from the raceplanes. Each provides an exciting new viewing angle for understanding the sport, and each features the Red Bull Air Race host cities, meticulously incorporating the unique settings of these appealing global locations into the race environment.

The Flight Deck allows fans to go right inside the race teams’ inner sanctum: This mixed reality app, developed in close collaboration with Microsoft and utilizing its HoloLens that brings holograms into the real world, gives users the chance to stand next to a virtual one-to-one scale Edge 540 raceplane as if they were in the hangar. Moreover, they can explore the rules of the sport in depth – from navigating a chicane to crossing the Finish Gate – and compare pilots in their head-to-head rounds.

The Red Bull Air Race LIVE VR experience uses real-time telemetry data straight from the pilot’s cockpit and re-creates the flight in a 360-degree virtual reality, so viewers can become fully immersed in a race from multiple angles and viewpoints, including the cockpit. Thanks to Google’s Daydream mobile platform for high-quality VR content, the combination of a Daydream View headset and any Daydream-ready smartphone transports viewers right into the racetrack. The VR experience is fuelled by live flight data like latitude, longitude, roll, pitch and airspeed to generate astounding perspectives and a real-dimensional, live visualization of the pilot’s view as the Air Gates and the local landmarks flash by at up to 370kmh, with users able to track the jaw-dropping speed and G Force. Marking a world first in data broadcasting on the platform, fans can dive into not just races that have already taken place (on demand), but also those happening live.

The future of motorsport today: with more to come

The ingenious, rapid-fire technology development of the Red Bull Air Race has brought the sport from audacious beginnings in 2003 to the official World Championship it is today, with 21 countries and an even larger number of cities featured as sensational hosts to its nearly 90 races so far. Whether fans are flocking to global destinations to see the Air Racing stars live, or engrossed by stunning scenes of the race via TV and augmented reality, technical wizardry brings them the future of motorsport today, piquing their interest in the race and everything that surrounds it. With more technical innovation in the works, that engagement is destined to become even broader and deeper with each season.