Home
»
News
»
Racing for a purpose 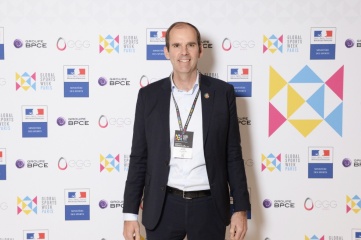 Host City spoke with Richard Brisius, Race Chairman of The Ocean Race, to find out what why sustainability is so important to their hosts, sponsors and sailors

Sport brings benefits to physical and mental health, building a sense of community and purpose. But reconciling these with the business of sport can create a quandary – particularly when people are increasingly inclined to spend time looking at devices than participating in sport.

“Kids in America don’t play anymore; they sit in front of their screens,” says Richard Brisius, Race Chairman of The Ocean Race. “What’s their perception of sport and how do we attract them to it? Do I chase eyeballs and clicks, or produce something that’s relevant and educating?

“It’s quite easy for sports to think we don’t have much effect, but we do. Sports has for a long time has been about a healthy mind and a healthy body. Sport shouldn’t go too far away from its ideals. If we do that, if we just chase views at any cost, we will lose credibility. Business and sponsors are looking for sports that take the responsibility to do something for purpose, and that is sustainable.”

Concerns over sustainability are at the forefront of all sports today, and sailing is right on the front line of environmental change. Anyone who has watched Blue Planet will be aware of the beauty and fragility of the ocean.

“The ocean has always been our playground, our stadium. 70 per cent of the world is covered in ocean – very few people go out there, but we do, and we see it change.”

Ocean health has been at the core of the race since its launch of the event in 1973. “Conservation comes naturally to sailors,” says Brisius, citing the example of Peter Burling and Blair Tuke, Olympic gold medallists who came second and third in the last Ocean Race and set up the Live Ocean charitable trust.

The Ocean Race runs an ocean science programme, where the racing boats are fitted with advanced equipment to test water all over the world for salinity, CO2, temperature, microplastics and other indicators. The data is sent to the National Oceanic and Atmospheric Administration (NOAA), UNESCO and other science databases.

“We go to places where no one else goes. It’s sad to say that we found microplastics everywhere across the world, even between Cape Horn and New Zealand, at Point Nemo – the furthest away from land you can be.”

They also have an education programme in 29 countries and run a series of 12 Ocean Race summits around the world to raise awareness of ocean health.

Hosting for a purpose

The Ocean Race goes to great cities all over the world. The next race, in 2021-2022, takes in ten host cities, starting from Alicante, going on to Cape Verde, Cape Town, Shenzhen, Auckland, Itajai, the US city of Newport, Aarhus, the Hague, then into the Mediterranean with the grand finale in Genoa, where Christopher Columbus first started sailing.

Because the event is hosted in the city for one to two weeks, it attracts a good number of visitors, creating good visibility and economic impact, says Brisius. It also brings ticket-free activities for citizens in race villages.

The next opportunity to host The Ocean Race is in 2025, and some cities are already committed and others in talks. Unsurprisingly, sustainability comes top of the list of evaluation criteria. “That’s important in the way cities bid for us. We want them to say how hosting the Ocean Race will change how they work around sustainability.

“The Ocean Race is about racing for a purpose. Sport should not underestimate its role in society.”