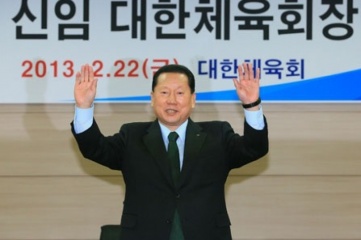 Kim Jung-haeng will become head of POCOG on an interim basis. (Photo: Yonhap)

Vice-president Kim Jung-haeng has been appointed interim leader of POCOG, taking over from president Kim Jin-sun who left shortly after audit investigations.

Following the unexpected resignation of PyeongChang 2018 Winter Olympic Organising Committee chief Jin-sun, the committee have appointed one of their six vice-presidents, Jung-haeng, to take charge in the interim. Jung-haeng will be briefed on the progress of the Games preparations on Thursday and will head the organisation until a permanent replacement can be found.

Kim Jin-sun left his post on Monday citing the need for new leadership. It was revealed yesterday that this had followed an investigation by the South Korean Board of Audit and Inspection into the financing and management of the Games, leading to speculation in the South Korean media that Jim-sun’s departure was not voluntary.

Jin-sun resigned in a speech to POCOG, saying: “PyeongChang 2018 is at a turning point for the latter half of its Games preparation, which requires more detailed planning and execution. At this critical juncture, I believe that PyeongChang 2018 needs new leadership and a stronger system that will effectively carry out various Games-related projects. And this is why I decided to resign as President of POCOG.”

This all follows a troubled few months for the PyeongChang Games which have faced a slew of construction and sponsorship problems as well as the resignation of vice president and secretary general of the organising committee, Moon Dong-hoo, due to health concerns.

In May the IOC urged PyeongChang to focus on venue construction, test events, marketing and Games services due to tight timeframes. Gunilla Lindberg, chair of the IOC coordination commission, said: “The 2018 Games are on the right track but it is clear that much work remains.”

Following the resignation of Kim Jin-sun the IOC released a statement saying: "We have full confidence that these activities will be delivered by the POCOG team in a timely manner and using their existing processes. We continue to work closely with them on their preparations for the Games."