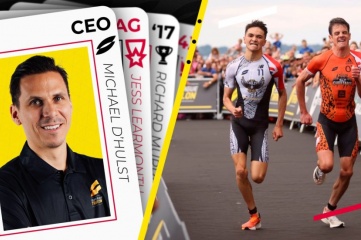 Set for a very bright future, Super League Triathlon CEO Michael D’hulst reflects on how the organisation has emerged stronger from the last two years

I am very proud to see the achievements of Super League over the last three years.

In 2019 we decided to grow the organisation, build out a team in London and, in arguably one of the hardest times for the event industry, we have truly established ourselves as an organisation that has substance.

We have extended our content offering, added a second series with the Arena Games and put together our best ever Championship Series in iconic venues featuring a new team concept.

Looking back and reflecting on 2021 as I am, I feel I also really need to take into account 2020 given the way the world has gone.

When you look at the triathlon landscape it makes me very proud. To deliver three Arena Games events – an entirely new concept – during COVID times was exceptional, as well as delivering our most exciting Championship Series since we launched in 2017.

To put it into context within our sport, the PTO has done many great things but in terms of events it also has a new concept and in three years have partnered on one event with Challenge and delivered one themselves. Many Ironman races have been cancelled including Kona and even World Triathlon’s schedule has been impacted.

We brought the Championship Series back in iconic venues: London, Munich, Jersey, Malibu. We had the best in the world racing for four weeks back-to-back and the Series for both male and females was won on the last run of four weeks of racing!

Over the last two years SLT has grown from a great concept to a brand, and a league that has substance, a solid fan base, broadcasters invested in it and athletes committing to it.

Any organisation, even if the idea is the greatest and the team is strong, needs maturity to show substance, and without substance even a great idea and a strong team can fail.

For the Arena Games we are now partnering with World Triathlon to drive this into the next Olympics.

What does that mean? That a young, dynamic organisation can deliver a concept that is considered even by a traditional organisation such as a governing body as part of the future of the sport. Also that the Super League as an organisation has enough substance for World Triathlon to jump on to the boat with us.

It adds kudos and credibility and enhances the offering for sponsors, partners, hosts and investors that want to come on board.

Behind all of this sits an organisation that not only delivered these events, but has never failed to deliver.

From a media perspective the Championship Series was deemed thrilling to the last. The broadcast feedback was unanimously positive and in terms of PR and digital we have continued to grow substantially and can now claim to be the most engaged triathlon property.

It’s been a challenging couple of years for everybody, but Super League has emerged from it far stronger and ready for a very bright future, which is an incredible achievement.