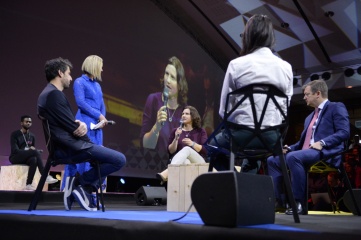 Tokyo will be safe and Paris will emit half the carbon of London 2012, Tony Estanguet, president of Paris 2024 Organising Committee of the Olympic Games told Host City at Global Sports Week Paris

The role of sports in dealing with climate change may have been the most prominent on-stage theme at Global Sports Week Paris – largely thanks to the challenging presence of “Young Sports Makers” – but it was another threat to humanity that dominated conversations amongst participants. One insider told Host City that the novel coronavirus, which is currently forcing the cancellation of several major events in China including Olympic qualifiers, could even lead to the cancellation of the Tokyo 2020 Olympic Games.

But Tony Estanguet, president of the Paris 2024 Organising Committee of the Olympic Games, is confident that the show will go in Tokyo.

“We are following this closely at the moment,” he said. “We don’t have an impact on what’s happening in Asia with the coronavirus, but we will learn from how Tokyo 2020 put in place good measures and actions to protect the security of athletes and spectators.

“Tokyo 2020 have declared that they are very involved in this topic. It’s good that, with the Japanese culture, when they decide to do something they will always deliver very carefully and effectively. We can all be very confident that Tokyo 2020 won’t be affected by this.”

This view was echoed by Andrew Parsons, president of the International Olympic Committee. “We are concerned but trust that the health authorities on a national and global level are able to control it,” he said.

While epidemics could become more prevalent in the future, the organisers of Paris 2024 are confident that they would be well equipped to react if an outbreak were to happen in their own Olympic year.

“Of course, as an organising committee it is something you want to avoid, so we have good relations with the state and the minister to make sure that if something like that were to happen, we would have a good response,” said Estanguet.

Paris is also watching and learning from Tokyo in many other areas. “Our team has been associated with the preparations of Tokyo 2020 over the last two years through the Coordination Commission meetings. All our directors went to Tokyo to have special exchanges in terms of venues, technology, sport communication – I’d like to thank Tokyo 2020 for sharing their expertise.

Games-time will be the key moment, he said. “We’ll go there to observe and learn. It will be very important for us to follow the event itself backstage. Many of my team have never organized an Olympic Games, so for them it will be very useful to go there.”

Half the carbon of London

London 2012 was a great step forward in sustainability for the Olympic Games and 12 years on, Paris is aiming for a new benchmark.

“We have no choice. This is a challenge the whole of humanity is facing and events need to be part of the solution,” Estanguet said.

“Our ambition is to divide by two the carbon footprint of the Games. Compared to London it’s less than half the footprint.”

The biggest contributor to carbon emissions is facilities, followed by transport. Paris’s ambition is all the more impressive considering that the target includes transport to – not just within – the host city.

“For the first time we will take into consideration all transport, including planes and spectators coming here, which is 1.5n tonnes of carbon. And within Paris our objective it to make sure people use public transport,” he told Host City.

The third biggest contributor to carbon emissions is energy, which provider EDF is mitigating by using 100 per cent renewables for the Games.

Staying in step with project milestones is not easy for any Olympic Games organiser. “We have many challenges,” said Estanguet. “We will start the first construction over the next months. It’s key to start as early as possible, to keep to the timeline.”

“We are still on track to deliver the first element of the buildings in January 2021. We have good commissions to choose who will build the aquatics centre.”

Using 95 per cent existing or temporary venues reduces much of the capital expenditure for Paris, but the Games will still require 6.8 billion euros of funding, including 1.2 billion of sponsorship.

“The commercial programme is on track,” he said. “It’s not as fast as Tokyo 2020, but their budget is much higher. With Paris 2024 we are in a situation where we can limit the budget to make sure we can deliver without having big exposure in terms of budget as has happened in recent Games, including Tokyo, where the budget has really increased since they have been elected.

“My first objective is to control the budget. We are confident we will find this money from the sponsorship programme, which is 1.2 billion euros. So far, we have good contact with companies and I’m very confident.

“We’ll also engage with the population; we’ll launch a big programme with Club 2024 open to everyone to participate in 2024. That’s crucial for us this coming year, to engage at a national and international level.”

Paris had the choice of four sports to add to the programme for 2024 and appealing to young audiences was central to the decision. “We decided to choose two nature sports: surfing and climbing, and two more urban sports, breakdancing and skateboarding, to make sure youth who are really engaged on social media will be attracted by the 2024 programme,” said Estanguet.

This will be the first time that breakdancing features in the in the Olympic Games. “It is a good combination with the values of Paris 2024 because of the creativity and the link with culture – and it’s very technical, physical and spectacular. We believe it will add something new and different from the 28 current sports.”

He also revealed why the organising committee chose Tahiti as the venue for the surfing: “Because at this time of year there is a 95 per cent chance of the perfect wave.”

Sport as a service

“Right now we are at a crucial time for the sport movement. People want sport but the they want it differently – they expect it as service. We have to be more aware of what people want from us and what they need.

“Young people are waiting on us before, during and after the Games – we have to ready to bring them more facilities, more sports, more education in sports.”

And sport is not just for its own sake or for entertainment – it has a big role to play in tackling the big threats to humanity. “Sports can be the solution for better public health and environment. Sport can be a big solution for all politics and what society is facing right now.”