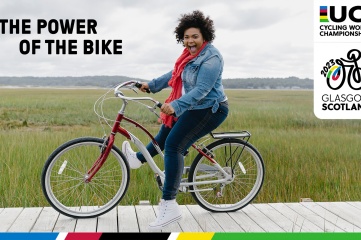 The ‘squiggly bike’ as the host identity has been designed to encompass a feeling of playfulness, inclusivity and positivity

[Source: EventScotland, 19 March] The Union Cycliste Internationale (UCI) and the organisers of the inaugural 2023 UCI Cycling World Championships have unveiled their ambitious brand identity for this prestigious new event on the UCI International Calendar taking place in Glasgow and across Scotland in August 2023.
The 2023 UCI Cycling World Championships will be the biggest cycling event in history bringing together 13 individual World Championships events for the first time with the world’s top cyclists and para-cyclists competing for the coveted rainbow jersey in disciplines including road cycling, track cycling, mountain bike, BMX Racing, BMX Freestyle, trials and indoor cycling.
The Championships will also be a catalyst for collaboration and positive change across the country through the ‘power of the bike’, inspiring people to ride bikes more often for fun, exercise and to move around.
The new brand identity, which has been created by Glasgow design agency Stand, seamlessly combines the professionalism and credibility of the UCI with the warm, friendly welcome of Glasgow and Scotland – both working in harmony just like a bike and its rider.
The ‘squiggly bike’ as the host identity has been designed to encompass a feeling of playfulness, inclusivity and positivity, acting as a lasting symbol of the event and what it aims to achieve for communities right across Scotland.
It also incorporates the UCI rainbow in its design, which in a first for a UCI World Championships, will remain in place after the event, with the UCI approving the ongoing use of the rainbow colours in support of the wide-ranging policy ambitions of the event to develop cycling in Scotland. This means the people of Scotland can take the ‘squiggly bike’ to their hearts as a lasting inspiration to celebrate the power of the bike long after 2023.
Cabinet Secretary, Fiona Hyslop, said: “The Scottish Government is pleased to be working with the UCI to host the 2023 UCI Cycling World Championships. Hosting this mega-event is a game-changing opportunity for cycling in Scotland.
“The brand identity being launched today reflects Scotland as a nation – bold, inclusive and innovative. I am sure the ‘squiggly bike’ will prove popular with cyclists across the country and become a widely recognised symbol of cycling in Scotland.
“It is a major endorsement of Scotland and our ambition to be one of the world’s top cycling nations to have approval to continue using the UCI rainbow after the event as lasting inspiration and a continued celebration of the power of the bike.”
The event identity has been developed to uniquely differentiate this new combined UCI Cycling World Championships from the individual discipline UCI World Championships and will be used for the future editions in 2027, 2031 and beyond.
UCI President David Lappartient said: “The 2023 UCI Cycling World Championships will bring together, for the first time in the history of our sport, several thousand athletes from different disciplines and five continents in an unprecedented celebration of cycling in Glasgow and across Scotland. The event logo and visual identity we are unveiling today illustrates the excellence and universality of the UCI World Championships combined with the expertise, hospitality and vision of our hosts. This unique event will leave a lasting legacy in Scotland for generations to come and will make history in the UCI and our sport in all its forms – competition, leisure and transport.”
While the 2023 UCI Cycling World Championships will put Scotland’s elite cycling on the map, it will also be about real stories of everyday champions inspired to everyday triumphs.
Councillor Susan Aitken, Leader of Glasgow City Council said: “As one of the top five ultimate sporting cities in the world, and the UK’s only UCI Bike City, Glasgow is delighted to host the 2023 UCI Cycling World Championships. We’re pleased to see a nod to the city’s famous Squinty and Squiggly bridges in the squiggly bike logo and in the continued legacy of the event.
“Scotland has produced some of the world’s finest elite riders and, while this is an important part of our country’s history, our civic pride comes from building and managing world-class and Olympic sporting venues which are open to everyone from children to adults, and from grassroots level to professional athletes.
“This is the true power of the bike, inspiring people of all ages and backgrounds to get out and realise or rediscover the pleasure of keeping fit and healthy – both mentally and physically – in the lead up to and long after the 2023 World Championships.”
Dame Katherine Grainger, Chair of UK Sport, said: “This is a great day for everyone involved with the 2023 UCI Cycling World Championships as they reveal their brand identity to inspire people across Scotland.
“UK Sport are investing £4million of National Lottery funding into the Championships to demonstrate our commitment to bring more of the world’s biggest sporting competitions to our shores and how, through world leading innovations and collaborations they can have long lasting positive social and economic impact.
“The 2023 UCI Cycling World Championships present an historic first for the sport and it is an honour that Scotland has been tasked with delivering them. We know from experience from working on the biggest sporting events in the country that these Championships will truly make a difference to the communities involved and this is a key moment in engaging with them.”
In addition to the unveiling the new brand identity, the organisers have also launched a new website – www.cyclingworldchamps.com - for those keen to find out more about the event, its ambition and sign up to be part of the journey.
The Championships is being delivered in collaboration between cycling’s governing body the UCI, Scottish Government, Glasgow Life, UK Sport, British Cycling and VisitScotland with its EventScotland team, with the partnership creating a blueprint for future editions by ensuring the inaugural event is authentic, innovative and distinctive.