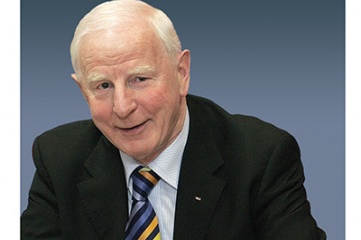 Patrick Hickey, President of the European Olympic Committees (EOC) and IOC Executive Board Member looks ahead after a seminal year for the EOC

“How do you follow a year like 2015?” is something we will all be asking ourselves at the EOC head office in Rome this week.

My answer is to go back to basics and to revisit the EOC’s primary purpose as an organisation: to focus on the specific needs of Europe’s NOCs.

Last year was of course the year that Europe added the missing fifth ring to the continental games of the world by staging our inaugural European Games in Baku, Azerbaijan. Those wonderful 17 days of Games created more headlines and interest in the work of the European Olympic Committees than any previous initiative or programme in our history. It was a magnificent event and a great milestone for the EOC and the Olympic Committee of Azerbaijan. But it’s important to remember that the work of all 50 of our NOCs and affiliated organisations continued unabated before, during, and after the Games.

In 2015 our NOCs scaled great heights. To highlight a few for example: the NOCs of Austria, Liechtenstein and Georgia all showed expert teamwork, innovation and organisational capacity in staging the 2015 European Youth Olympic Festivals whilst the Czech Olympic Committee staged a hugely professional EOC General Assembly in Prague that exhibited the perfect balance of private support from partners and public support from volunteers. I highlight these examples not for praise above others but to give a small snapshot of the hard work, cooperation and innovative thinking that characterised the activities of all 50 European NOCs in 2015.

Last year, the sports industry as a whole started a process of important and necessary change to its collective governance to make transparency and accountability an absolute priority. These changes were, rightly, front and centre of everyone’s thinking. Yet it’s important to train our eyes to see the enormous amount of great work that was done in the background. This helps remind me why making these changes as soon as possible is so important: because sport is so important to people’s lives. If we govern our organisations better we will attract more participation in what we do, from corporate sponsors, from governments, from fans and from young people.

To ensure the changes take root, it is up to every single person in the sports world to shoulder more responsibility in defending the integrity of sport. It starts with the good governance of sports organisations and the individual honesty of sports administrators, but from here it must run through every strand of the sports world, touch every affiliate, every fan, and every athlete.

I echo Thomas Bach’s words for 2016 when he says “as the role and relevance of sport in society continues to grow, so do the expectations of the public vis-à-vis the integrity of athletes and sports organisations. It is our shared responsibility in the Olympic Movement to provide new answers to new questions.”

2016 is, of course, an Olympic year. And it is incredibly exciting that for the first time ever the Olympic Games will be staged in South America. It shows that the Olympic family is a truly global family and it is a wholly positive milestone for the Olympic Movement.

Europe has staged 30 editions of the summer and winter Games but must fight hard now to maintain its pre-eminence, which is why it is so pleasing to see three of the four 2024 Candidate Cities coming from Europe. In addition, as the most developed sports continent, we have a vital role to play in establishing the models of, not just good governance, but exceptional governance, which the whole Olympic family can benefit from.