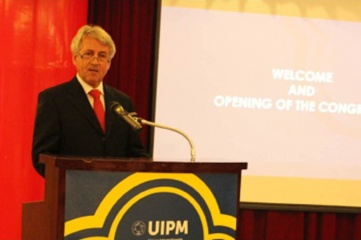 National Federations from around the world voted for significant changes to the governance of Modern Pentathlon at the 67th UIPM Congress (November 7-8) in Taipei.

The Congress approved a number of motions designed to modernise the way the UIPM manages Modern Pentathlon and its sub-sports, including:

• A comprehensive review and update of the entire structure of the UIPM, including changes to simplify and reduce the number of rules on internal organisations

• A simplification of election rules for all elective seats within the UIPM.

“This Congress has been a big step forward for development with new member federations joining our global community and new innovations such as Laser Run making our sport even more accessible to the world,” said UIPM president Dr Klaus Schormann.

“The National Federations are very united in focusing on sport, education and the integration of society through sport. UIPM is committed to the IOC Agenda 2020 and to supporting the protection of the clean athletes.”

Expansion was the main theme of the UIPM Congress 2015 as Dr Klaus Schormann, UIPM President, and Shiny Fang, Secretary General, reviewed another year of relentless progress and innovation and looked ahead to a bright future.

“With a strong vision, with a clear understanding that change is a certainty, and with a total commitment by all the family, modern pentathlon can and will be successful in retaining and gaining on its position after the 2020 Olympic Games in Tokyo and, in fact, being considered as an essential part of the Olympic program and one of the International Federations that has adapted itself successfully to the challenges of these times,” said Secretary General Shiny Fang.

“As we continuously improve our structures centrally and in every country, ‘expanding’ our reach is our real next frontier. The right choices in this area will make a huge difference in the lead up to Tokyo 2020, when the IOC will once again review the sports program, and in the long run, also beyond 2020.”

UIPM also became the first International Federation to express its backing for the Declaration of Support for the Olympic Charter, which was signed by Olympians representing all five continents at the inaugural World Olympians Forum organised by the World Olympians Association (WOA), in Moscow, Russia in October.

The two-day conference also revealed the winners of the 2015 UIPM awards and named the venues for numerous future UIPM competitions.