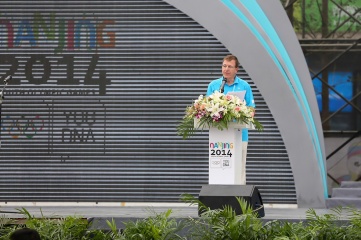 After the withdrawal of Nigeria and Sierra Leone, athletes from Liberia and Guinea will be unable to compete in contact sports or swimming

Three more young athletes from West Africa will not be able to compete in the Nanjing Youth Olympic Games due to the perceived risk of transmission of Ebola, it emerged on Friday.

Nigeria and Sierra Leone have already pulled out of the Games, citing discrimination and warnings from Chinese authorities.

“Based on health authority guidelines it has been decided that athletes from affected areas will not compete in combat sports,” the IOC said in a “joint communique” with the organising committee.

It was also decided that no athletes from the region would compete in aquatics, based on “the inability to completely exclude the risk of potential infection”.

The remaining West African athletes will be “subject to regular temperature and physical assessment throughout the period.”

On Wednesday it emerged that Nigeria and Sierra Leone were withdrawing their entire teams from the Youth Olympic Games.

"Nigerian athletes were quarantined, isolated and barred from training alongside athletes from other countries since they arrived the competition venue over news of Ebola virus in Nigeria. Following this discrimination, we have resolved to pull out from the Games," said Gbenga Elegbeleye, director general of the National Sports Commission.

According to Patrick Coker, the president of the National Olympic Committee of Sierra Leone, their Chinese Embassy had warned them that they "might find themselves in a troubled and awkward situation once they get to China's port of entry."

But according to the IOC, no teams have been excluded from the Games. “The organizing committee has made it clear that all delegations are welcome to the Games and each country is free to take their own decision on attendance,” the joint communique said.

“We regret that due to this issue some young athletes may have suffered twice, both from the anguish caused by the outbreak in their home countries and by not being able to compete in the Youth Olympic Games.”

The IOC and organising committee will invite the athletes to compete at a future event in Nanjing “to experience the welcoming atmosphere and spirit of the city and Jiangsu province.”

They have also offered to include the national flags of the affected countries in the opening ceremony, which takes place on Saturday 16th December and promises to be as spectacular as Beijing’s in 2008.