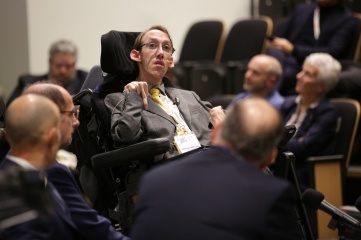 Thomas Williams, Managing Director of Enabling Abilities takes Host City on a journey towards fair representation of disabled people in the organisation of major events

So what were my Herculean Feats ? I was a Gamesmaker at 2012 – part of the inspired generation. Every disabled person got a job, which created a number of positives.

Firstly, it meant the largest employment of disabled people as a percentage of the total workforce. This forced an under-represented group to become represented fairly – not the usual tokenism.

Secondly, it provided inspiration for a whole generation of disabled people. This fitted perfectly with the main slogan for London 2012: Inspire a Generation.

Thirdly, the Olympics can be used to learn life skills. It empowered and inspired me to be here with you today after starting my own business – Enabling Abilities.

However, whilst being Herculean for most people with disabilities, there were aspects of the Titanic and a sinking ship for event management.

The random selection of all disabled people did not match with the jobs required. The selection process for able-bodied people was more robust in the matching process and declined those who did not satisfy the criteria.

Roles were also assigned inappropriately for disabled people. Disabled people were given roles in functional areas that could not accommodate their particular disability creating extra work for other people. For example, I was placed with Accreditation due to skills with mental processing, but the job required accurate physical dexterity to type quickly. My disability required an assistant to support. This was overlooked during the selection process.

Renee De Wet, my Functional Area Manager, stated: “Instead of putting you into Accreditation, you should have been put somewhere else where you could have used your mental capacity and your skills better than putting you with something that requires physical.”

An example is that my assigned support worker became ill and the Inclusion Department sent me away because I could not fulfil the role on my own. However, I enlisted the support of my long-suffering father and continued my role.

Games that came after London 2012 worked out how to match disability with a job or functional area. Glasgow 2014 Commonwealth Games had a reasonable adjustment section at interview stage.

Valerie Mitchell, Head of Games Operation, explained: “When they invited them to the interview, they asked them if they had any disability requirements so, at the interview, they were equipped to deal with that. Functional areas that they could be in were suggested and there would be a variety of roles within the functional areas. People were given the opportunity to opt for roles that were more relevant to themselves.”

Everybody knows that these days markets are leveraged by spending power such as the Grey Pound, for the elderly market and the Pink Pound for the LGBT market.

BAME is represented by the Brown Pound. And there are more unusual ones: the Green Pound, for the Eco-Conscious Market; and the Red Pound, for the Plus-Sized Market.

But people like me fit into the Purple Pound sector. The spending power of disabled people and their families in the UK is a mind-blowing 249 billion pounds each year. To put this into context, the entire GDP of New Zealand in 2018 was 160 billion pounds. The UK Events Sector is worth 42.3 billion pounds, so failure to exploit the disability market leaves businesses like ours missing a lucrative opportunity.

I will end with the words of the late, great Stephen Hawking at the Opening Ceremony of London 2012 – the Games that proved the power of enabling us with our purple pounds:

“We are all different, there is no such thing as a standard or run-of-the-mill human being, but we share the same human spirit. What is important is that we have the ability to create. To use this stage to show the world that regardless of differences between individuals, there is something that everyone is good at, is very important.”

This article is based on a speech delivered by Thomas Williams, Managing Director of Enabling Abilities at Host City 2019, the largest meeting of cities and sports, business and cultural events.