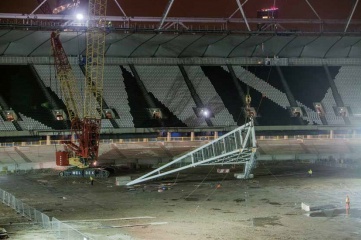 London 2012’s emphasis on temporary construction was a landmark in sustainability, but what did it mean for the designers and the organising committee that had to deliver the venues?

“Nothing had really been done on this scale before,” Tom Jones, principal of Populous, the practice that designed London 2012’s temporary venues, told delegates at International Sport Event Management Conference in London.

“There was a significant amount of temporary venue work going on at golf championships, temporary music festivals and those sorts of things, but this was quite unique.”

London 2012’s venue masterplan was not just unique; it was nothing short of revolutionary. Historically, the majority of Olympic Games venues would be built to last, but designed with the requirements of the short-term event in mind. This meant a relatively small amount of temporary overlay was required; it also resulted in a legacy of underused venues.

London 2012 subverted this norm. Only six of London 2012’s venues were new and permanent. The remainder consisted of existing world-class venues like Wembley Stadium, Wimbledon and Lords, supplemented by more than 20 temporary venues.

“We had a very high dependence on temporary structures because of the ‘no white elephants’ approach – not building where there was no legacy use,” explains James Bulley, CEO of Trivandi and former director of venues and infrastructure at the London Organising Committee of the Olympic and Paralympic Games (LOCOG).

LOCOG delivered more than 250,000 temporary seats for the London Games, all of which now have been taken down. A 23,000 seat arena was built in Greenwich Park for the equestrian events, plus a 15,000 seat arena in Horse Guards. The basketball arena in the Olympic Park was also completely temporary.

In the case of London 2012, the Olympic Delivery Authority (ODA) delivered the permanent structures, but LOCOG also had a major build on its hands. According to Bulley, “it became very much focused and dependent on the very high risk elements of delivering construction.”

He questioned whether the split of work was reasonable. “We had the ODA delivering the permanent construction. Should they also have taken on the temporary construction? When you are looking at a city delivering immense infrastructure on this scale, whether that sits within the organising committee or outside it is something that should be thought through.”

The temporary nature of the structures meant that they had to be built quickly, and the elements were not on LOCOG’s side in the weeks running up to London 2012. “One of the key challenges was delivering temporary structures in greenfield sites in torrential weather,” said Bulley.

It wasn’t just the organising committee that was under strain. The temporary event commodity market was under pressure to deliver seats, tents, cabins, fences, temporary power supplies, barriers and much more.

“Under extreme pressure, the event supplier commodity market had to deliver huge amounts of infrastructure, which it perhaps wasn’t geared up to do so at the volume at which we needed to do it.”

Nonetheless, London 2012 raised the bar and the result is a faster, higher and stronger temporary infrastructure sector. Bulley points to advances in the seating industry in particular.

“We put in new standards for designs, because the market couldn’t supply what we were looking to achieve. A lot of the seating in London 2012 was new; it was manufactured for the event. We set new standards for safety and comfort, for example the 800mm seat-row depth, rather than the 720mm which you sometimes see in temporary stands.”

Jones adds: “We were keen to make the experience of going to a temporary venue as close as going to a permanent venue as possible, both in terms of comfort and quality.”

London 2012 also pushed the envelope when it came to sports surfaces. “We worked incredibly hard with the governing bodies and sports surface companies to deliver the fastest possible tracks and highest quality fields of play,” said Bulley.

Despite the large volumes and short timeframes, the local industry responded well to these demands. Bulley questions whether mega events in the immediate future will have the same resources to hand. “We had a very sophisticated event supply industry within Europe to tap into. For Brazil, it’s much more challenging.”

The big scale-down
Some of the permanent venues also had temporary aspects to them, with modular construction techniques being deployed to make them scalable. For example, the two “wings” that were plugged in to the aquatics centre to provide extra capacity during the Games are now being removed to leave the 1,500 to 2,000-seat community pool, in line with legacy plans.

Jones said: “The reduction in size of the aquatic centre, the opening of the copper box have all pretty much followed plan. The Olympic stadium is clearly different.”

The 80,000 seat stadium used in Games time was originally planned to be reduced to 25,000 seats, with a permanent athletics track. Bulley said: “We went to the market and said would a Premiership football club be prepared to take the stadium on? That was not the case at the time, so we followed the athletics legacy.”

After much wrangling, the stadium has been determined as the home ground of West Ham United. Having a top flight football club as a tenant will help to ensure regular custom in the Queen Elizabeth Park, as the Olympic Park will be known. “If you can retain it as a large facility it’s a much preferable solution,” said Bulley.

However, it does necessitate major changes. “We are managing to keep a significant amount of the structure,” said Jones. “When we were doing the original design we were trying to keep as much flexibility as possible. But clearly if the legacy use changes, then that is going to create challenges afterwards.”

These challenges include removing seating in the lower tier and extending the roof. The promise of an athletics legacy is also being honoured alongside the West Ham tenancy. “As the Olympic stadium, it will have to serve other uses than football,” said Bulley.

The revised designs for the stadium include a retractable lower tier that reveals will reveal the athletics track for events such as the World Athletics Championships, which the venue will host in 2017.