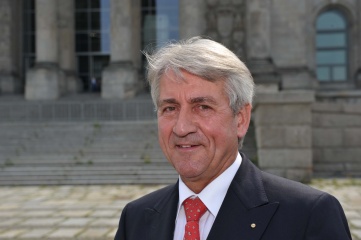 A former teacher, UIPM President Dr. Klaus Schormann is a long-serving member of the IOC working group on Culture and Olympic Education. He has also chaired the IOC Sub-Commission on Youth Olympic Games

HOST CITY: Pierre De Coubertin said Modern Pentathlon “tested a man’s moral qualities as much as his physical resources and skills”. How does Modern Pentathlon achieve this and why is this still important today?
Dr. Klaus Schormann: Modern Pentathlon first appeared on the Olympic programme in Stockholm in 1912 when De Coubertin’s wish was to devise a test suitable only for the “complete athlete”. In pursuit of this aim he created the ultimate test of an athlete’s fitness, courage and skill – a sporting challenge like no other. Modern Pentathlon combines five traditional disciplines in a one-day format and is unique in sport as a complex mental and physical examination.
Today it remains as important as ever in the Olympic Movement. Pierre de Coubertin’s vision has its roots in the Ancient Games of 708 where Lampis of Sparta was the first winner of Pentathlon and received the prestigious status of “Victor Ludorum”. In this time, Pentathlon consisted of discus, long jump, javelin, stadium run and wrestling. The format has changed beyond recognition but the principle remains the same: it is the complete sporting challenge.

HOST CITY: Competition for inclusion in the Olympic programme is strong. What are the key factors that have enabled Modern Pentathlon to retain its place in the programme?
Dr. Klaus Schormann: Modern Pentathlon has been a core sport of the Olympic Games ever since 1912. Although it has had to justify its inclusion in the Olympic programme several times, it has retained a constant presence and this is because of two things: strong Olympic heritage and modern innovation. First we had to shorten the Modern Pentathlon from five days in duration to one day, because it was not compatible with the demands of the mass media, viewers and spectators.
To make it a more compelling spectacle, we introduced several changes and developments. We introduced Laser Pistols at the Youth Olympic Games in Singapore in 2010. We created a running/shooting Combined Event (like winter biathlon) that made the sport safer for athletes and spectators, allowing them to get closer to the action than ever before. Most recently, in addition to the fencing round robin, pentathletes have the opportunity to win extra points in a new bonus round. In less than an hour, all of the athletes compete on one piste in front of the spectators to win bonus seconds for the Combined Event.
To make our sport more compact and exciting, we had to adapt our format as we are living in a fast changing world with a modern, diverse and digital society. You can inspire others to change, only if you are ready to change yourself. Our new format is compact, media and spectator friendly with entertainment in between. It is not only a competition anymore – it is five sports brought together to create one big event. As De Coubertin wrote in 1918, “the individual who truly deserves that name ‘Olympian’ is the competitor in the modern pentathlon”. We are certain that he would have approved of Modern Pentathlon’s proven ability to move with the times and stay fresh.

HOST CITY: And how can the values of UIPM and Olympism help with the education and personal development of young people worldwide?
Dr. Klaus Schormann: In our fast changing world, education has an important role in society. As Nelson Mandela said “Sport has the power to change the world” and currently we need to change and act against crime, hate and discrimination more than ever before.
Modern Pentathlon is not only a big event but it has remained through 100 years of history very traditional and unique in the Olympic Movement. The Olympic Agenda 2020 clearly demonstrates our decision to live up to our values and principles. The values of “excellence, respect, friendship, dialogue, diversity, non-discrimination, tolerance, fair play, solidarity, development and peace” should be demonstrated through our sport around the world. Our Unity in Diversity is important to make those values and principles remain relevant in society.
Through Modern Pentathlon with the five different skills you have a platform for education, integration of all religions and cultural societies with the message for a more friendly, humanitarian and peaceful world.

HOST CITY: How do the UIPM’s other events, such as the new Laser Run format, help to engage new athletes and audiences?
Dr. Klaus Schormann: The Laser-Run is the latest original creation of UIPM, derived from the Combined Event and launched in 2015 as a non-Olympic sub-sport. The simple format of running/shooting helps introduce and engage new athletes and new audiences as athletes of all ages from 8 to 80 can participate and the event can be staged on beaches, in cities and in the countryside.
The Laser Run is the basis of the UIPM Pyramid and for many is the first step on the way to participating in Modern Pentathlon. The bigger the basis, the more athletes will find their way to the top. Modern Pentathlon keeps the legacy of Pierre de Coubertin as a strong heritage.