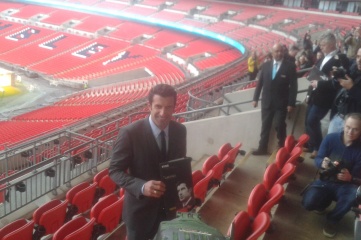 Luis Figo was the first of the candidates for the FIFA presidency to launch his manifesto today, proposing radical changes to an organisation that he says has deteriorated under the current leadership and suffers from a “negative reaction”.

The retired Portuguese footballer pledged to redistribute at least half of FIFA’s funds equally around the world to develop football at the grass roots level.

With the aim of establishing good governance, Figo wants to establish a FIFA Football Council to advise the president and Executive Committee, as well as an independent governance, audit and compliance committee with powers to “control the actions of the president”.

He also announced a proposal to increase the number of members on the Executive Committee, with equal representation from each of the continental confederations.

In a bid to boost the global appeal of his candidacy, he also announced plans to increase the number of non-European teams competing in the World Cup.

Drawing on his own life story, Figo revealed that his campaign is entirely self-funded. “I grew up in working class of Lisbon, playing on streets,” said Figo. “My life changed through the power of football and I am lucky to be an independent man. I don’t owe anyone anything; this means I can serve FIFA in the interest of football, for football.

“Thank God I’ve had a long and successful career. When you retire, you need to have a balance – it’s on a smaller scale than FIFA’s budget but the way I’ve managed my finances shows that I can stand on my own two feet. I have enough money to pay for my candidature.”

Figo plans to redistribute FIFA’s revenues to enable children all over the world to get a chance to become professional footballers.

“I was very lucky and fortunate to play and get training from an early age but I know this opportunity does not exist for many children across the world,” he said.

“This is why I propose radical changes to the way FIFA redistributes its membership payments.

“I want to see at least 50 per cent of FIFA funds spent on grass roots football and to increase the size of the funds available.”

This amounts to US$ 2.5 bn. He also wants to distribute an additional US$1bn directly to the member associations over a four year period.

Currently, the member associations receive less than US$ 4m per four years.

He questioned FIFA’s current approach of setting aside a US$1.5bn reserve pool to cover the possibility of the World Cup being cancelled. “This money is not FIFA money – it is the member associations’,” he said.

“US $5m is enough to cover the operational cost of FIFA.”

This offer of cash may help Figo to gain backing for his campaign from the 205 member associations around the world that elect FIFA’s president on 29th May.

In another bid to boost the appeal of his campaign outside Europe, Figo also said he would like to increase the number of teams competing in the World Cup, without increasing Europe’s participation.

"I believe we should consider proposals to expand the competition to a 40 or even 48-team World Cup," he said. "Both these options are feasible with an extra three to four days of tournament play."

Central to his campaign is rebuilding trust in FIFA.

“In the last few months and years we’ve come to realise that the FIFA image has deteriorated.

In Brazil, during the most important sport competition the World Cup, I could see protests against the organisation – and this was in a country that loves football deeply.

“I could see the reaction to the president of the organisation – I could see quite a negative reaction. This is not an appropriate image.

“When I started to look at all the news about scandals I decided that something needed to change.”

The changes that Figo proposes are major and structural.

“There must be transparency. My proposal is to change structures, so there will be a wider consultation with members.

“In the different confederations, we will organise meetings between 10 and 15 member associations... and the summaries of those strategic meetings will be distributed and passed on to the board.”

He also announced plans to establish a new FIFA Football Council to advise the FIFA president and the Executive Committee on issues including the calendar and format of events as well as the laws of the game and football development.

This council would have a moderating role over hosting decisions.

“It is also important to maintain decisions within the council in terms of which countries go on to organise the World Cup,” he said.

On the issue of the controversy and investigations surrounding the 2018 and 2022 World Cups, he acknowledged that there are reports of “irregularities that have taken place, reports not made public.”

But indicative of his aim to achieve global appeal, he did not support any of these claims, saying “If there are no irregularities, I don’t think Qatar should be prejudiced [against].”

He also proposes to merge the existing ethics and disciplinary committees to create a new governance, audit and compliance committee.

“For there to be transparency, the governance committee would have to be a fully independent committee from the council and also from the executive committee, and therefore that they could control the actions of the president.

“With these measures defining the different responsibilities and powers of each body, I think we would have the right measures for transparency within the organisation.”

The composition of the Executive Committee would also become a more level playing field with equal representation internationally. Each continental confederation would have one seat per ten member associations, with an additional seat for member associations that have won the World Cup, with a limit of eight seats per confederation.

With six confederations each bringing up to eight members, this would represents a major increase on the current Executive Committee membership of just 27.

Can he win it?

Figo chose to launch his bid in London, with the venue for the press conference switched from Stamford Bridge to Wembley Stadium at 24 hours’ notice.

"London is a global city and Wembley is an emblematic football space. There is no better place to present my ideas to the world,” he said.

Figo’s candidacy was nominated by six European associations. Whether he will be able to gain support from the 205 member associations, the vast majority of whom are said to have unwavering support for the incumbent president Sepp Blatter, remains to be seen.

“Mr Blatter, well I respect him, he has been leading the organisation for many years. He has had many positive achievements for football and for the organisation but a point has reached where change has needed.”

Figo’s other competitors in the presidential race are Prince Ali Bin Al Hussein of Jordan and Michael Van Praag of the Netherlands.

“Looking at the other candidates, we have some good ideas, someone who is in the Executive Committee and who knows how the organisation works internally. Also the Dutch FA president I know and respect very much; he has a lot of experience.”

He denied suggestions that he might step aside to support a single challenger to Blatter.

“My idea is right now is to run to the end, to see as many people as possible regarding the presidency and to convince them with my ideas.

The president of FIFA will be elected at the FIFA Congress on 29th May.