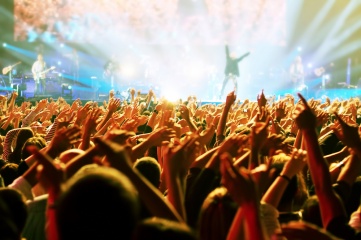 Live Nation has continued growing in the second quarter and for the first half, with revenue up 12 per cent and AOI (adjusted operating income) up 6 per cent on a constant currency basis in the second quarter.  The increase in revenue was led by our concerts business as we continued attracting more fans to more shows globally, which in turn drove AOI growth in our advertising and ticketing businesses through the first half of the year.

With the majority of our tickets sold for the year, we are confident that we remain on track to deliver our 2015 plan, and all key leading indicators reinforce our expectation of continued top- and bottom-line growth as we build global market share in our core concerts, advertising and ticketing businesses.

We have built the industry's most scalable and unparalleled live platform, bringing 450 million fans in 40 countries to that magical two-hour event each year.  Concerts are the flywheel for our high-margin on-site, advertising and ticketing businesses and this year we expect to deliver record operating results, increasing the revenue and profitability of each of these businesses.

Starting with the concerts business, we have now sold approximately 75 per cent of our projected tickets for the year, and through July we are pacing 7 per cent ahead of last year's ticket sales; this is our top leading indicator that we will increase concert attendance again this year.  We continue to be the world's leading promoter with about three-quarters of the top 25 global tours, including U2, Imagine Dragons, Lady Antebellum and One Direction.  Along with attendance growth, we have also grown per-fan on-site revenue this year by 18 per cent to over US$20 per fan in our amphitheaters and festivals as our sales initiatives, particularly those focused on the high-end fans, pay off.

The strength of our global platform continues to deliver growth as we have increased year-on-year attendance.  In the second quarter over a million more fans attended our shows, also spending money at the concert, paying service fees on tickets and providing advertisers with an engaged audience.  For the full year we expect to grow our fan base by over two million, which on its own would be one of the top five promoters in the world, as we build our audience across our global portfolio, including arenas, festivals, amphitheaters, and theaters and clubs.

At the same time, we continue building our global platform for the future, most recently adding Marek Lieberberg to establish our concerts business in Germany.  Germany is one of the top three concert markets in the world and Marek has a history of promoting more than 700 shows for over two million fans each year.  Adding these shows to Live Nation can make us the top promoter inGermany, and moving these two million tickets to the Ticketmaster platform will substantially increase our scale and market position in ticketing in Germany.  With this move, Live Nation now has a promoting presence in all the major Western European markets, and along with our presence now in nine Asian markets, we are the only promoter able to provide global and regional touring support at scale for artists.

Our artist managers continue to provide a strong pipeline of shows to our concerts business aligned with this growth.

In the sponsorship & advertising business, we have delivered strong growth through the first half, with both revenue and AOI up over 20 per cent on a constant currency basis.

Our online advertising continues to build rapidly, growing revenue by 36 per cent and AOI by over 30 per cent at constant currency for the first half.  We now have over 65 million unique monthly visitors to our sites and broader network, making Live Nation one of the top three online music networks.

On the content side, we have entered the second year of streaming live shows with Yahoo! Live, with an increased focus on festivals this year, including EDC in Las Vegas and the Wireless Festival in the UK so far, and Creamfields, Landmark and Voodoo to come.  Our Live Nation TV network with VICE Media is launching this month, and will provide music fans with the combination of Live Nation's access to 24,000 concerts and VICE's unique story-telling ability.

With the growth of our festival business we are also continuing to build our base of major advertising clients, increasing the number of companies that pay us over US$1 million a year by 15 per cent; now delivering a collective $200 million to Live Nation in 2015.

With all parts of our advertising business now performing and growing rapidly, we expect a record level of AOI growth in 2015, with continued strong runway.

Ticketmaster has continued building its global leadership as a ticket marketplace this year, with 7 per cent growth in site visits leading to a 10 per cent increase in combined primary and secondary Gross Transaction Value (GTV) at constant currency.

A key driver behind this growth in site visits and GTV has been our mobile first strategy, building our products for ease of use and viewing on mobile devices.  Mobile now consistently accounts for more than half of our traffic, both in North America and internationally, and year-to-date we have deployed 27 updates to our apps globally, as we are enhancing the fan experience.

As a result, we continue seeing growth in mobile ticket sales, up 21 per cent through the first half, and now accounting for 21 per cent of total ticket sales.  Our app install base continues to build as well, now at about 19 million, as more fans are seeing the benefits from improved search and ticket management functionality.

I am confident that 2015 will mark the true point of conversion of Ticketmaster to a technology company.  We have the right leadership and technology teams in place, building a marketplace and delivering products with great fan features, while also capturing cost savings for the business.  With all this, Ticketmaster has never been better positioned.

A year of growth

After growing the business in the first half of the year, we expect 2015 to be another year of growth and record results for the company, and we are confident that we will deliver the final year of our three-year plan.  Based on the strong position of our leading indicators in concerts, sponsorship & advertising, and ticketing, operationally we expect revenue and AOI growth in each of these businesses and overall for Live Nation this year.  And more fundamentally, we continue to see a wide set of both organic and acquisition opportunities to further grow each of our businesses beyond 2015, directly building on the success we have achieved to date.