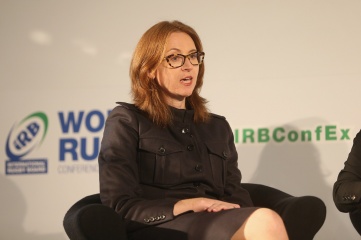 Susan Ahern, Head of Legal and Legislative Affairs at World Rugby (IRB) says the IOC's Principles of Good Governance are achievable for federations

Speaking at the IRB World Rugby Confex, IOC vice president Sir Craig Reedie said sports federations would be expected to – but not obliged to – sign up to the IOC’s own Principles of Good Governance

The IOC announced on Tuesday that, as part of its Agenda 2020 recommendations, all organisations belonging to the Olympic Movement should “accept and comply with the Basic Universal Principles of Good Governance of the Olympic and Sports Movement.”

At the IRB World Rugby Confex in London on Tuesday, HOST CITY asked IOC vice president Sir Craig Reedie about the feasibility of such a wide-reaching project.

“The reason why the IOC tries to impose on every stakeholder in the Olympic movement the Principles of Good Governance is that sport has a constant demand to be autonomous. It wants to be left alone to run its own rules, and the only way that it will ever be able to maintain the request for autonomy is to have good governance,” Reedie explained.

Agenda 2020 recommends that organisations should be responsible for self-evaluation and sending information through to the IOC.

Asked by HOST CITY if this might create prohibitive administrative costs, Susan Ahern, head of legal and legislative affairs at World Rugby said, “Not expensive if you are used to running your organisation in a fair, balanced and transparent way.

“The IRB may be an International Federation but we have a corporate structure that supports that – you are bound by company law, audits and so on. We have all those elements in place that any corporate would.”

Agenda 2020 recommends that the Principles of Good Governance should be “updated periodically, emphasising the necessity for transparency, integrity and opposition to any form of corruption.”

Ahern said “Certainly it’s an area where you want to continually strive to be as good as you can be, and it’s an area that’s being looked at by the IRB on a constant basis.”