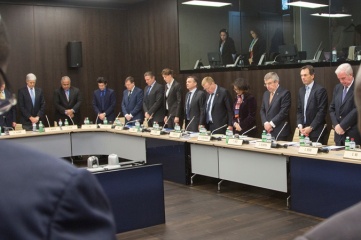 IOC President Thomas Bach has announced the composition of its Olympic Agenda 2020 working groups, with members of wider society included to help develop the future of the Olympic Movement and Games

Thomas Bach, the president of the International Olympic Committee announced the membership  on Thursday of 14 working groups that will develop “Olympic Agenda 2020” – the IOC’s roadmap for the future of the Olympic Movement.

Agenda 2020 centres on five themes: the uniqueness of the Olympic Games, athletes at the heart of the Olympic Movement, Olympism in action, the IOC’s role and IOC structure and organisation.

Each working group is to be chaired by an IOC member. John Coates, an outspoken critic of Rio’s preparations, is to head up the working group on bidding procedure. Sir Craig Reedie is to lead on good governance and autonomy.

The working groups include athletes and representatives of the International Federations and National Olympic Committees. A number of experts have also been appointed from outside the Olympic Movement, including representatives from leading international non-governmental and business organisations.

The working groups will first meet in June, close to Olympic Day, and their findings discussed at the Olympic Summit in July and at an Executive Board Meeting on 22-24th October in Lausanne. The resulting proposals for Olympic Agenda 2020 will then be presented to all IOC members for discussion at the IOC Extraordinary Session in Monaco on 8 and 9 December 2014.

The complete list of Working Groups can be viewed here.