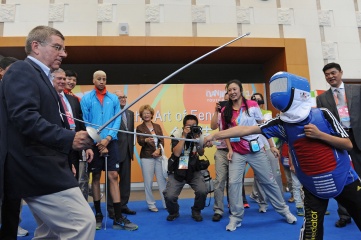 IOC president Thomas Bach has responded to SportAccord president Marius Vizer’s attack by dismissing his views as personal and not representative of Olympic sports federations.

President Bach also said consultation with SportAccord on matters concerning the Olympic Games was not necessary, as the IOC collaborates closely with Olympic sports federations directly.

“Mr Vizer: thank you very much for your open words which you have been expressing here,” Bach said, addressing SportAccord Convention after Vizer’s confrontational opening speech.

Bach said: “When you say that the IOC and SportAccord have to cooperate in order to have a new model for the Olympic Games, for the organisation and for the generation and distribution of the money then I have to say very clearly, “No.” For different reasons.

“First of all our partners are the Olympic Federations. They are doing the effort. And whenever we have an issue with them, whenever there are ideas we are discussing with them.

SportAccord is the umbrella group for both Olympic and non-Olympic sports federations.

“We prefer to address all the issues in a direct open dialogue as stipulated by Olympic Agenda 2020 and as is being practiced inside the IOC where we are openly discussing and preparing all the discussions and decisions with the representatives of the international federations,” said Bach.

“There the international federations have two seats in the IOC Executive Board and whenever you have a question, because you said you were surprised by some of the decisions, I can only offer that you speak with the representatives of the international federations in the IOC Executive Board and they can fully inform you and advise you what is going on.

“And then you will learn that in the IOC there is an open dialogue, not only among the Members of the IOC EB but we also have as some of you may remember open discussions in the IOC Session in the presence of everybody.”

In his speech, Vizer had accused the IOC of a lack of transparency.

“It was about one year ago here in Sochi when we had such a Session where all the questions by all the stakeholders were openly discussed,” said Bach. “Afterwards many of you contributed to this Olympic Agenda 2020. We received around 40,000 submissions and I thank you all for these contributions.

Vizer also said the launch of the Olympic TV channel had not been developed in a transparent manner.

“About the Olympic channel, you could have already read about it in my brochure for campaigning to become IOC President about two and a half years ago,” Bach responded.

“This is not to mention the first time I proposed it was back in 1994, but for this you are way too young to have followed, this is only for elderly people like me to have some nostalgic feeling to come back to this.

The IFs, NOCs and national federations cannot be considered in isolation, Bach said.

Like all the international federations, SportAccord is recognized by the IOC.

“As an IOC recognized federation you are a full member of this Olympic Movement and you have of course access to the Olympic channel,” said Bach.

“This is why are offering you workshops here for you to discuss how this can be done in the very best way and how you can really tap this great potential and how you can ensure that your sport and athletes are enjoying worldwide presence through this channel and how in this way you can grow your sport and make it more popular.  And you can promote the values we all share.”

Bach raised further points in his speech, which ran on for longer than the five minutes he had been allocated.

“I was invited to give a five-minute welcome speech but I’ve been a little bit longer as I had a lot to tell you after this friendly welcome I enjoyed here.”

Addressing the audience primarily made up of international sports federations, he said “Our doors are open to each and every one of you. We are making this offer of cooperation and support to each and every one of you. I thank you for having taken it already in the last one year and a half and having contributed to this effort of open dialogue and concerted action within the sport movement.”