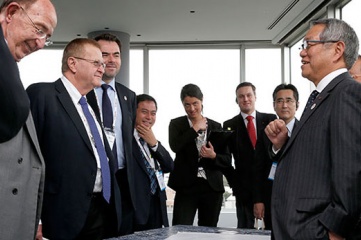 The IOC coordination commission met with the new Tokyo 2020 team

John Coates, chairman of the commission, said at the close of the meeting: “We have been very impressed with what we have seen this week during our visit.

“The current level of planning; the venue layout; the involvement and integration of the Government authorities at all levels; and the experience and diversity of the new Executive Board all leave us confident in Tokyo’s ability to deliver great Games for the athletes in 2020.”

From 2 to 4 April, the group participated in the first IOC project review of the Games preparations and were updated on progress made since Tokyo was elected as the host city of the 2020 Olympic and Paralympic Games in September 2013.

The IOC executives were introduced to members of the new Tokyo 2020 executive board. The Commission was particularly pleased to see that a number of athletes and women are on the Board, representing the culture and diversity of Japan, the IOC said in a statement.

Coates said: “Since my last visit to Tokyo with IOC president Thomas Bach in November 2013, Tokyo 2020 has successfully undertaken a number of important steps on its seven-year Olympic journey. The establishment of the organising committee, the constitution of its executive board, the creation of a high-level advisory committee, and its participation in the observer programme for the Sochi 2014 Olympic Winter Games will all enable Tokyo to face the coming six and a half years with a high level of confidence thanks to this quick start.”

The venue visit also included a trip to the site of the future Olympic Village, where the delegation was joined by Tokyo Governor Yoichi Masuzoe, Olympic champion Koji Murofushi, and a number of young Japanese rowers, including Olympian Haruna Sakakibara, who took part in the London 2012 Games.

Yoshiro Mori, chairman of Tokyo 2020 said: “We have just completed three days of meetings, and I am very pleased that we were able to hold a range of productive discussions. We now have a much clearer understanding of the direction required for us to take to deliver successful Games.”

The first full IOC coordination commission visit to Tokyo will be held from 25 to 27 June 2014. This will be the first of 10 Commission visits to the 2020 host city over its seven-year lifecycle.

“We will now work towards implementing the action plan that we have formulated together over the past three days, and we look forward to welcoming the members of the IOC Coordination Commission back to Tokyo this summer,” said Mori.