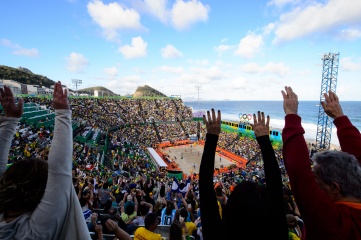 Host City: Volleyball is extremely popular internationally – but where in the world is it the most popular?

Mario Medeiros: Both volleyball and beach volleyball have huge appeal in nations all over the world, including China, USA, Brazil, Russia, Japan, Poland, Thailand, Italy, Turkey, Germany, France and many others. If we talk about China, for example, the women’s national volleyball team are current Olympic champions. During the final at Rio 2016, between China and Serbia, China’s main TV channel, CCTV, recorded one of its highest-ever viewer ratings for an Olympic Games event. The IOC data report on the Games also proves volleyball’s popularity in China, noting that more than one billion viewer hours of the total recorded for volleyball at Rio 2016 came from China. And to further highlight the overall popularity of indoor and beach volleyball worldwide, I am happy to confirm that volleyball (indoor and beach combined) was the most popular sport at the Rio 2016 Olympic Games in terms of the accumulated number of viewer hours, reaching more than 2.6 billion hours. This figure is equivalent to every single person in the world (approximately 7.5 billion people) watching 20 minutes of volleyball. This is a huge number!

But the popularity of our competitions goes well beyond the Olympic Games. At the 2017 FIVB Beach Volleyball World Championships in Vienna this summer, the stadium was packed every day, where a total of 170,000 spectators came to enjoy the high-class beach volleyball experience. We are also proud of our annual events, for example this year’s World League Group 1 Finals were in Curitiba, Brazil – the home of volleyball – where more than 23,000 fans filled the Arena da Baixada football stadium, which hosted matches during the 2014 FIFA World Cup.

Volleyball is one of the most-practiced sports in schools and universities in some of our key markets, such as the USA and China. It provides solid values of team spirit and discipline which reflects the professional development and education of each individual in life. At the same time volleyball is a non-contact sport that could be played in different environments by people of different ages. This all contributes to its global popularity.

Host City: Where do you see the greatest opportunity for future growth and commercial potential?

Mario Medeiros: Part of what is so exciting for us at the FIVB is that while we have grown significantly over recent years we know there is so much potential for further growth all around the world. In terms of individual countries with huge potential, I would point to China and the USA. Both countries have been responding positively to the new momentum of the FIVB, as we build on our current successes and look to the future with the creation of the New Volleyball League – the new annual competition that we plan to launch next year. Both countries are not only at the top of the world GDP rankings but have strong volleyball teams which we expect to challenge for titles in the future.

The creation of the New Volleyball League is part of the leadership plan formulated by FIVB President, Dr Ary S. Graça. The plan focuses around the Nucleus Project, the aim of which is to concentrate our vision and investment on the key markets around the world, according to GDP rankings. We believe that these nations are crucial to raising the relevance of volleyball around the world, which will then in turn help smaller volleyball nations through greater funding and opportunities for hosting.

Host City: What formats of the sport are creating the highest level of interest?

Mario Medeiros: Of course, each country and National Federation within the FIVB Family has different interests and goals to achieve but we have been pleased to see great interest from our key stakeholders in the New Volleyball League. With this event, we plan to revolutionise our annual national team competitions. The new event will be composed of a two-tier league: The New Volleyball League, made up of 12 core permanent teams and four challenger teams, as well as a secondary Challenger League.

Participating teams, selected according to a number of criteria including their technical seeding and commercial potential, will play against one another in a round robin format. The New Volleyball League and the Challenger League will feature a promotion and relegation system ensuring volleyball remains one of the most competitive sports in the world for both genders.

The FIVB for the first time, together with IMG, will regulate content production and distribution to guarantee the highest quality and consistency of the output fans around the world will consume from its events throughout the season. The FIVB will also highlight world class performances from teams and individuals throughout the season.

Host City: How important was the introduction of beach volleyball into the Olympic programme to widening the appeal of volleyball?

If we look at the numbers from the IOC’s data report regarding the Rio 2016 Olympic Games, 99.9% of all the tickets available for beach volleyball were sold – that number speaks for itself. The great sporting action, spectacular sea front setting and amazing technology and sport presentation created the perfect beach party atmosphere and established beach volleyball as one of the most in-demand sports at Rio 2016.

The FIVB has a great relationship with the International Olympic Committee, and President Thomas Bach attended this year’s FIVB Beach Volleyball World Championships in Vienna. He was amazed by the atmosphere created by athletes and audience, with the help of cutting-edge technology and sports presentation.

Host City: Asian cities have hosted several FIVB events recently. How would you describe these experiences and what are your expectations of future events in Asia?

Mario Medeiros: Hosting events in Asia is spectacular for the FIVB. We have a strong fan base on the continent, with impressive ticket sales resulting in packed stadiums and cheering crowds for the FIVB’s most prestigious events, as well as high exposure for our sponsors and relevant TV partners across Asia.

In August, Nanjing, China hosted the FIVB 2017 Women’s World Grand Prix Group 1 Finals, with six teams showcasing world-class performances over five days of competition. The organization also involved around 2,000 staff and 312 volunteers, but it was a fantastic spectacle. We enjoyed enormous success in ticketing and merchandise sales, but also saw great results in terms of media coverage and TV ratings, as CCTV5 reported consistently high viewing figures on the nationwide-broadcasted matches. Six out of the top ten highest rated shows broadcast on this network during the entire period of the FIVB 2017 Women’s World Grand Prix Group 1 Finals were volleyball matches, including the number one broadcast programme.

The FIVB continues to invest in technology, innovation and sports presentation. We have introduced the Challenge system as we believe that the match should be decided by athletes and not the referees. The system was introduced to the Olympic Games in 2016 and we had more than 30% successful challenges in both indoor and beach volleyball. With just one point being able to change the podium, the Challenge System brings more credibility and fairness to our sport.

The FIVB’s new standard for sports presentation moves fan entertainment to engagement, establishing the narrative of the game, as well as educating and engaging the audience. With the help of the extensive sports presentation team, composed of DJs, MCs, announcers, lighting technicians, producers, giant screen operators and others, we would like the audience to celebrate the game with some truly sensory experience through sound effects, loud music, big screens and lights.

We also want fans to be physically active in the way they celebrate the great moments of the game. We want fans to imitate volleyball actions, like the block or the spike. That’s an important message: move your body and be healthy.

Asian countries like China, Japan, South Korea and Thailand have been supporting these introductions and are delivering great events with new features in place. A volleyball match has become more than just a game. It has become a show, with spectators being active game participants, like actors on the stage. Therefore, the goal of the FIVB is to work together with the National Federations to deliver successful events across Asia and get fans more involved in sports, educating them throughout the match and ensuring they take home fantastic memories.

This interview was first published in the Winter 2017 edition of Host City magazine.