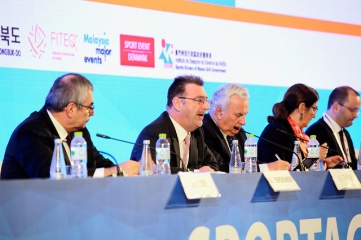 Good governance, partnerships with the private sector and the digital agenda are the key concerns facing summer Olympic sports, according to a new report from ASOIF

[Source: ASOIF] After almost 12 months’ work, the Association of Summer Olympic International Federations (ASOIF) today launched its report on the “Future of Global Sport”. The document aggregates the views of thought leaders and decision-makers from sport, business and government. It addresses political, social, technological, legal and economic influences, all of which are impacting International Federation (IF) decision-making and the model under which sport will be managed going forward. It also provides a historical overview of the foundations that underpin organised sport as we know it today and delves into the challenges currently being faced. The report concludes by laying out a vision for the future of sport over the next 20 years including key recommendations for the IFs and for ASOIF itself.

ASOIF President Francesco Ricci Bitti said on the occasion of today’s launch: “ASOIF has invested significant resources in this project and we believe the results will help IFs to better understand, anticipate and react to the changes and trends confronting them. In fact, some of the outlined future scenarios may serve as a wake-up call. This report invites us all to challenge our thinking at ASOIF and encourage our members to challenge their own.”

Key findings of the Future of Global Sport report include:

Following-up on these findings, the report concludes with a blueprint for IFs to adapt and take advantage of the opportunities presented by today’s disrupted and competitive sporting landscape. This consists of ten recommendations for IFs related to two equally important themes of governance and entrepreneurialism.

The report will also provide ASOIF with guidance and a basis for prioritisation, particularly in relation to its work on establishing a solid future role for IFs, as the involvement of both public authorities (governments) and private business interests in sport continues to grow.