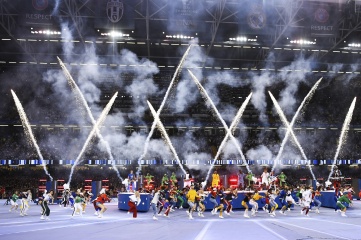 Host City: Events involving multiple host cities are usually delivered by a local organising committee (LOC) in the host nation. What prompted UEFA to bring the organisation of its events in-house instead?

Christian Hirschmueller: UEFA’s approach is built on the understanding that knowledge and experience are critical success factors to deliver UEFA’s events on a very high service level in the most effective and most efficient ways.

Historically, UEFA started to be directly involved in event operations in 2002 for the UEFA EURO 2004 in Portugal. For UEFA EURO 2008 in Austria and Switzerland, the geographical proximity of the hosts still allowed to have a LOC model, with many synergies created between the LOC and UEFA Events SA. It was thus a kind of intermediary step on the process to fully bring operations in-house.

By founding UEFA Events SA – a 100%-owned subsidiary of UEFA – after a very successful UEFA EURO 2008, UEFA was able to keep in-house the knowledge and experience obtained during its two previous major sport events. Furthermore, this knowledge was structured in so-called ‘Competence Centres’, such as Technical Services & Overlay (TECH). With the in-house organisation of the annual UEFA Club Competition Finals as from 2013 onwards, UEFA Events SA has been able to use the knowledge and experience of the Competence Centres across all UEFA competitions and maximise the output in terms of effectiveness and efficiency.

This process which lasted over several years, from the first operational steps in Portugal to the current performance of UEFA Events SA, was initiated, led and implemented by the CEO of UEFA Events SA Martin Kallen.

Host City: Which aspects of event delivery does UEFA outsource most – from operational management and expertise, down to products and services?

Christian Hirschmueller: The daily business in the operational part of UEFA Events SA is to plan and produce UEFA’s events. This means to appoint and contract suppliers, organise the works and coordinate the several activities with all relevant stakeholders. These typically are tasks of companies offering main contractor services which we operate by ourselves.

Regarding operation, this seems one of the main differences between UEFA and other organisers of major sport events: While for other major sports events it might be key to involve a main contractor in order to deliver the event including all the above tasks, UEFA Events SA is covering this part itself and looks for specialised suppliers delivering the services directly.

This leads to a more direct interaction between internal stakeholders and suppliers and contractual relations are thus getting more transparent. Our experience shows that it saves financial resources, time for complex overhead management and reduces miscommunication between all parties due to less interfaces.

Host City: Can you give us an idea of the scale and scope of technical services and overlay required for an event like the European Football Championship?

On the one hand this includes the existing technical infrastructure, such as stadium and grid power systems, the proper functioning of the pitch floodlighting or the operation of sound systems, giant screens and stadium TV system.

On the other hand, this also includes the provision of temporary infrastructure inside and outside the stadium, as the technical and infrastructural needs for such major sports events are higher than existing systems are usually able to cover.

The TECH planning team was made up of seven people: three in Switzerland and four colleagues in Paris. The overall budget of TECH for UEFA EURO 2016 was EUR 26m.

Host City: For most mega events, the host nation benefits from the opportunity to engage with local suppliers and sponsors to deliver the event. How can hosts of UEFA events benefit if all the procurement and marketing is handled centrally?

Christian Hirschmueller: Let me give you the example of UEFA Technical Services & Overlay (TECH) for UEFA EURO 2016 in France.

All suppliers were chosen in an open and public tender process. Key factors for choosing suppliers are quality of equipment, availability of resources as well as experience for these very specialised fields in major sport event. Once this is given, local/national suppliers are very attractive for us as they have often the advantage of low logistics and accommodation costs. With these parameters, in total more than two thirds of TECH’s budget remained in the host country.

Beside the planning team mentioned above, the 10 TECH venue managers and the 10 TECH venue coordinators were all locals – half of them never participated in major events before, let alone in major sport events. This means that instead of hiring international crews, we developed a training programme and achieved a very successful knowledge transfer. This was mainly possible due to the model of UEFA Events SA and the core team in Nyon relying on the operational experience of several successfully delivered UEFA EURO tournaments.

Host City: In another innovation, UEFA is staging the 2020 European Football Championships in 13 host venues, all in different nations. It must be incredibly complex working in 13 different countries to deliver the event – how is this being managed?

Christian Hirschmueller: It is a project management challenge to organise a consistent UEFA EURO 2020 tournament under consideration of the new format with its multi-country aspect and cultural diversity. The main task is to prepare the stadiums – which are coming from different operational and infrastructural levels – for a EURO tournament operation.

At the beginning, the goal was to create a model that was as simple as possible, manageable, transparent and easy to understand for all stakeholders independent of their individual background.

For this purpose, UEFA Event SA has developed a process that regulates the activities of stakeholders to achieve agreed results together at certain stages, the so called ‘gates’. This process leads to the ‘UEFA Venue Operations Gate-Model’ summarising the process on one A4 page to support a common understanding in order to be ready for the next step in the planning phase.

Host City: What are you most looking forward to about UEFA Euro 2020?

Christian Hirschmueller: The UEFA EURO 2020 will take place from Bilbao to Baku and from Glasgow to Rome. It is a fantastic professional and personal enrichment to meet and cooperate with this large variety of characters and cultures and their different ways of living, during one event.

Host City: Thank you very much and I look forward to hearing you speak at Host City 2017! What are your expectations of this important meeting of cities and events?

Christian Hirschmueller: The Host City 2017 summit is an ideal place to meet and exchange with inspiring people of different branches.  I look forward to gathering new aspects and impulses for the work of UEFA Events SA.