Home
»
News
»
Indian Super League to be launched in Manchester 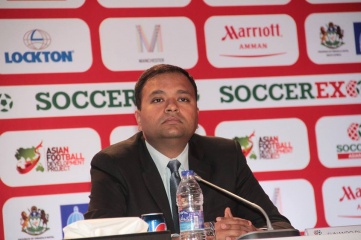 Plans for the eagerly anticipated Indian Super League (ISL) and the 2017 U17 FIFA World Cup will be officially presented to the global football industry at the Soccerex Global Convention, held in Manchester on 6-10 September, after the confirmation that a senior Indian delegation will be attending.

The session will begin with Kushal Das, General Secretary of the All India Football Federation, delivering a standalone keynote speech, outlining the explosion of the game in India.

Managed by IMG-Reliance, the ISL has attracted investment from India’s biggest companies and celebrities, with the likes of Sachin Tendulkar, Sourav Ganguly, DEN Network, PVP, John Abraham and Ranbir Kapoor becoming team owners, as well as partnerships with leading European giants such as Atlético Madrid and AFC Fiorentina.

The 2017 FIFA U-17 World Cup will be the first global football tournament hosted by “football’s sleeping giant” and will play a crucial role in developing youth football in India. With FIFA earmarking a potential  US$38m investment for the tournament, there are numerous business opportunities for suppliers from across the football spectrum, to engage with the key decision makers from the AIFF to learn about the multiple commercial opportunities the tournament will create.

The Convention kicks off with the Football Festival on 6-7 September, with the Conference starting on Monday 8 September. A major international exhibition and a programme of networking and social events complete the schedule for this world leading football business event.