Home
»
News
»
How the Paralympics raises the Games 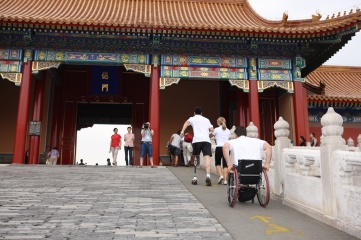 The Olympic and Paralympic Games in 2008 is often talked about in terms of China opening up to the world – not just its economy, but its society too.
“The main legacy of the Games in China was to create visibility of people with an impairment in China,” Xavier Gonzalez, CEO of the International Paralympic Committee told a select group of journalists at SportAccord Convention.
“I think 350,000 spectators with an impairment came to the Games. The coverage of the Games in China was very extensive. And the government created an accessible environment in the city with many improvements in public transport and roads; it helped to create visibility. That was the main legacy of the Games in Beijing: to showcase one tenth of the population of China and make them visible.”
Attitudes towards disability in China are continuing to develop long after the Games. “We have seen a huge interest and support from part of the Chinese authorities and our National Paralympic Committee. Leading up to Beijing 2008 and since then, China has maintained a high level of development,” said Gonzalez.
Of course, every host is different. Chris Solly, Director of World Academy of Sport, the educational partner organisation of the IPC, said:  “You’ve got to know where your society is; research and understand how people perceive people with an impairment in the country.
“London is very different to where Sochi and Russia was, for example. You’ve got to work out how to make it happen in your own environment.”
Local media is crucial to raising the profile of Paralympics and people with impairment within the host nation. The London 2012 Paralympic Games was broadcast by Channel Four, which ran an award-winning “Superhumans” marketing campaign and achieved record viewing figures.
The official broadcaster of the Rio 2016 Paralympic Games is Globo Group, with its SportTV channel broadcasting all 12 days of action and Globo TV screening more coverage than ever before.
“Channel Four and O Globo are two different media – they do it in different ways. That’s what we want, because it’s a totally different cultural environment,” said Gonzalez.
Asked whether he is still concerned about Rio’s delayed preparations to host the Games, Gonzalez said, “One of the advantages that we have is that everything they do for the readiness of the Olympics helps us. We always say the Olympics is our test event!
“Yes, the preparations are moving forward, yes are some of them are a little but last minute. We just came back from the Coordination Commission and we have seen a lot of progress but a lot of work needs to be done. At the moment we are very confident that we will have a very good Games.
“The most important thing from our point of view is to try and do things as soon as possible. The big difference we have seen in Rio, which is not only an issue for the organising committee but the overall context of the country, is that it’s better to have certain things earlier on.
“What we are going to take from this is that we and the IOC need to increase the support that we provide to the organising committees to make sure that the message is very clear and they can focus on the important things at the appropriate times.”
During the Paralympic Games, the IPC and the World Academy of Sport are staging the 2016 IPC Academy Campus, an educational and conference programme that gives insight into the complexities of organising and maximising the benefits from major sporting events.
Telling Host City about the Academy Campus, Gonzalez said “We bring people from previous Games and we incorporate the local context, and we incorporate people from the next Games and bidding cities to participate also in the programme; we look forward to the development of the Games.”
Looking ahead to PyeongChang 2018, the Olympic Games that follows Rio, the IPC is already looking to maximise synergies with Samsung, the IPC’s Worldwide Paralympic Partner in the Wireless Communications Equipment.
“In London, Samsung were very creative in the way they activated social media, which helped the IPC too. They’ve got much bigger databases than an organising committee, so they’re an integral part of how we deliver the programmes.”
The next Winter Games after PyeongChang will be in Beijing, where there is a big opportunity to develop Paralympic winter sport. China has yet to win a medal in any Paralympic Winter Games, but development is underway.
“We are very excited about how quickly the Chinese authorities have engaged with the development of Paralympic winter sport,” says Gonzalez. “In winter sport we have seen activities in alpine skiing, in ice sledge hockey. We are trying to build sports in China across the country.”

What’s happening at the 2016 IPC Academy Campus
The 2016 IPC Academy Campus will include a Games Experience Programme, Observers’ Programme and Inclusion Summit.
The IPC Academy Games Experience Programme (GEP) is a three day conference on 12-14 September focusing on the following topics: “Winning Strategies for Major Sport Events”, “The making of a Successful Host City” and “Marketing & Broadcasting” followed by site visits to related competition and non-competition venues.
The IPC Observers’ Programme, taking place between 6-17 September, includes a series of educational activities and roundtable sessions for event organisers with visits to all competition venues and the most important non-competition venues and specialised activities.
The IPC Academy Inclusion Summit on 15-16 September targets learning at the policy level, for business leaders policy makers and the Paralympic movement to discuss inclusion and accessibility