Home
»
News
»
How to create a music tourism hotspot 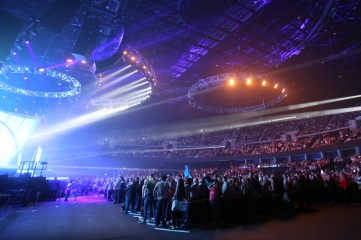 In 2015, music tourism generated £3.7bn in the UK and £295m in Scotland*. Host City 2016 speaker John Langford, Director of Live Entertainment at Scottish Exhibition and Conference Centre (SECC) and SSE Hydro tells us how cities can draw the crowds

Host City: We are very much looking forward to your participation in Host City 2016. What do you think is most interesting about the conference agenda?
John Langford: I think it’s a much needed conversation piece, realising the economic impact that big events can deliver. In particular I think there’s a growing focus on cultural events.

Host City: Are we seeing a greater convergence of sport and entertainment?
John Langford: Yes we are definitely seeing more of that and I think there are two reasons. The first is that the lines between sport and non-sport entertainment are becoming blurred. We are expecting it to be integrated: whether it’s a Super Bowl half time show or an opening or closing ceremony of Formula 1 Rocks, it’s becoming expected.
The second reason is that it adds value to sponsors and consumers. It brings in additional people and additional money. My wife will come with me to sport events if she knows there is going to be some kind of entertainment that she is going to be interested in. That brings in more eyeballs and more sponsors.

Host City: How does SECC work with the city of Glasgow to achieve this?
John Langford: Fortunately, the city of Glasgow is quite progressive in the way it approaches big events, more so than most other cities around the world. It’s always had a big drive to lead on hosting events, whether that’s conferences – they’ve got a very successful conference team at the city marketing bureau – or the major events team, who we worked with very closely on events like the MTV European Music Awards and Radio 1’s Big Weekend. We’ve got the MOBO awards coming up at the end of the year – those are driven by the city as opposed to promoters.
The real benefit of Glasgow is that there is a city strategy to drive cultural tourism. And it works both ways: the city can drive things to us, and if we have an idea we can drive it back to the city. A good example is the Ignition Motoring Festival in August, which is a concept that we came up with and the city bought into it and essentially it’s a whole campus-wide festival of motoring.

Host City: How do you go about programming content at SECC and SSE?
John Langford: We are quite fortunate in a way in that we don’t have major competition for our size in a good 200 mile radius. And Glasgow audiences are great; they are some of the best audiences in the world and we know from the research we’ve seen that they buy about 50 per cent more tickets that the UK average for live music events.
Typically anything that comes to the SSE Hydro is booked in the same way that the O2 is booked in London: a big artist like Madonna, U2 or Timberlake will typically book the O2 and the Hydro and then fill in the rest of UK and Europe on the back of that. So we are very fortunate in that we get a lot of proactive bookings; promoters will come to us.
We do however have challenges outside those busy periods where we try and create our own content and that requires working with promoters and artists and festival organisers to create events.
We are very cautious not to be promoters. Some venues feel differently but we feel we are not in the business of promoting. We would rather be in the business of coming up with concepts, taking a share of the risk, but we’d rather work with an established promoter to actually deliver the event.
We work very closely with AEG that owns the O2 in London on a country music festival called Country to Country. We are working on another music festival, the genre of which I can’t share just yet.

Host City: So you are moving towards “festivalisation” as well?
John Langford: Yes, I think that’s an audience trend. People are expecting bang for their buck. Way Out West in Gothenburg is an example of an urban festival, or the Great Escape in Brighton – those are examples of things that we would certainly like to see more of in Glasgow, not just on our campus. We feel that we are part of the fabric of Glasgow, just as much as Barrowlands or Hampden Park stadium.

Host City: How important is nurturing local talent for cities to develop themselves as cultural hubs?
John Langford: I think it’s all part of the same ecosystem. You need record labels, promoters, managers, recording studios; you need a whole ecosystem that creatively feeds itself.
Some of the research that I’ve seen on developing music cities is that it’s important to have all of the aspects working together; and ideally that it’s driven by the city and I think that’s probably the biggest challenge for a lot of cities.
It’s a bit like herding cats, particularly in the creative industries; there are a lot of entrepreneurs and independent thinkers and I think the challenge is creating an environment within which they can work. You need to lead without pushing and I think that’s a real challenge for cities.

Host City: How important is venue planning in creating entertainment hubs – not just physical venues but also using open spaces?
John Langford: Glasgow has a good range of venues, indoor and outdoor, sports and entertainment. I think it’s key that cities have that.
Secondly it’s licensing and I think a lot of cities need to work harder on this. You need to get all the city structures working together if the object is to bring more events into the city. Whether its occasional licenses for drinking, food or capacity, everything needs to work together.
You need a progressive planning regime in the city. In the UK there are a lot of traditional music venues that are being squeezed by pressure from residents. The gentrification of areas is causing a lot of venues to shut down, so there is a big drive, certainly from the music industry, to protect those venues.
But what you’re talking about is going that extra step. It takes a liberal, forward thinking city to recognise that there is going to be a bit of pain sometimes, whether it’s noise or hundreds of thousands of people coming to your city for an event – the progressive cities realise that’s where the economic impact comes from. You need to take a bit of pain sometimes to get the gain.

John Langford, Director of Live Entertainment at SECC and SSE Hydro, is speaking on 22nd November at Host City 2016 conference and exhibition on the subject of “Creating Entertaining Experiences for Visitors".