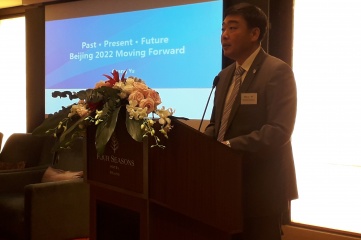 The first Host City Asia, staged in Beijing on 31 May, brought together hosts, organisers and owners of events to maximise the opportunities of the “Asian era of event hosting”

Host City Asia 2018 successfully concluded on May 31 at the Four Seasons Hotel in Beijing under the theme of “Attracting new audiences through sports and entertainment events”.

More than 120 representatives of cities and destinations, the Olympic Games, the Chinese government, international sports federations, organising committees and experts shared their strategies and explored the opportunities around hosting major events in Asia.

In his welcome address, Host City’s Editorial and Conference Director Ben Avison said “Although this is the first Host City Asia, it does feel very much like a homecoming.

“We launched Host City in Beijing in 2003, as a magazine bringing foreign expertise to the organisers of the 2008 Olympic Games – for which our CEO, Matthew Astill, received the Great Wall Friendship award from the Deputy Mayor of Beijing.

“And now, with Beijing being the first city to host not only the Summer but also the Winter Olympic Games, Host City returns to China with this valuable conference for Asia.

“As the IOC President Thomas Bach pointed out in his opening speech at the PyeongChang 2018 Olympic Games, we are now in an ‘Asian Olympic Era’.

“I would like to add that this is also an ‘Asian Era of Event Hosting’, more generally. Mega events are clearly the biggest way to attract new visitors or fans – but cities are interested in hosting a whole range of sports, business and cultural events, both large and small. Many Asian cities are developing extremely rapidly and using sports and culture to support their economic and social development.”

Chang Yu, Director General of Media and Communication Department of the Beijing Organising Committee for the 2022 Olympic and Paralympic Games, delivered an opening keynote address on the theme of “past, present and future”.

“I am very excited to be invited to participate in Host City Asia and have the opportunity to share the development of sports in China and Asia with fellow experts and industry peers,” he said.

“The Beijing Organising Committee for the 2022 Olympic and Paralympic Games looks forward to working together with everyone to create a wonderful and extraordinary Winter Olympics for the world in 2022. I wish Host City Asia a complete success.”

He also explained how BODA is building links with the cultural sector through the Beijing International Sports Film Week and Beijing Olympic Music Festival, while strengthening cooperation with the Belt and Road cities, Olympic cities, and international sports organizations to share China’s story with the world.

“UK sports are extremely popular in China; the Premier League, Wimbledon, World Snooker and Formula One are watched by hundreds of millions of people on TV and digital platforms here. UK sports are also physically here; World Snooker has events in five cities across China, Formula One in Shanghai, Clipper Race in Qingdao and Sanya and we believe there is still more potential.

“The legacy of Beijing 2008 on sports, infrastructure and society has been huge and this will dovetail into Beijing 2022 with the establishment of growing winter sports economy. International expertise can continue to develop sports infrastructure in Asia.”

Kelvin Fang, Senior Media and Marketing Manager at FIBA ​​China said: “Basketball is very popular in China, but FIBA ​​hopes to host the World Cup in China to bring a richer heritage to the host city. FIBA's goal is to allow basketball enthusiasts of all ages to participate in sports. Like 3×3 basketball, they will enter cities such as Beijing, Xi’an, and Chengdu. China is an important basketball market and more events will come in.

Luis Alexandre Pontes Rodrigues, Director of Asia and Oceania at FIVB said: “China is a market with great potential, and the FIVB can bring a lot of extra resources here. The FIVB is constantly looking to develop and to bring a wider audience participation. Nanjing will hold the finals of the World Women's Volleyball League for many years. The FIVB hopes to make it a flagship event. Volleyball has a very good future in China and the FIVB must understand this market in depth.”

Oleg Matytsin, President of the International University Sports Federation (FISU) said: “The sports world often thinks of new audiences as only being those in new places, perhaps where a rights holder has not yet hosted competitions. But new audiences must also be thought of as those young people who, each year, are arriving at the age where they will make decisions for themselves, where they will develop affinities and loyalties independently. These people are not just the future of one sport, or two sports, but the future of every sport.”