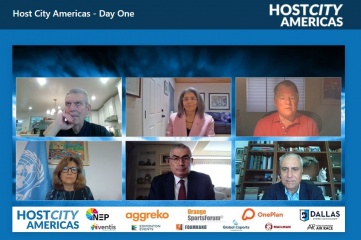 Beyond the immediate challenges of the pandemic, there are tremendous opportunities ahead for sports, business and society, delegates at the first Host City Americas heard

Under the conference theme of “Investing in Events”, speakers at the inaugural Host City Americas digital conference voiced optimism about the post-Covid recovery for the events industry and offered fresh ideas and solutions to global challenges.

With FIFA soon to select the 23 host cities for the 2026 World Cup and Santiago staging the 2023 Pan and Parapan American Games ahead of the much-anticipated 2028 Los Angeles Olympics and Paralympics, the two-day conference debated the hot-button issues affecting them.

A global audience of close to a thousand, including IOC members, sports ministers and leaders of event organizing committees and international federations, registered for the first meeting of cities and sports, business and cultural events for the Americas.

The themes of post-Covid recovery, digitalization, sustainability, private investment, esports and the changing media landscape all resonated with those in attendance.

The two-day conference opened on Tuesday with a keynote address from Anita DeFrantz, an IOC vice president. Speaking of a world ravaged by the coronavirus, she said the sports industry was forced “to examine everything” as events took a financial hit. But through virtual offices, new visions of how to produce and present sports had emerged.

Three weeks before the postponed Tokyo Olympics get underway, she said the execution of Games planning for event organizers and athletes had been hugely challenging against the backdrop of the pandemic. Preparing to host 11,000 athletes from 206 countries to compete in 33 sports was a tough undertaking for the IOC and Tokyo organizers.

“We may face similar issues with Beijing 2022. The good news is we will have the experience of Tokyo to make certain things go well. The Olympics and Paralympics can bring back the joy,” she told delegates.

Prof. Uğur Erdener, president of the Turkish NOC, head of World Archery and Chair of the IOC’s Medical and Scientific Commission, said the global vaccination program led him to believe “we are approaching the exit of the dark tunnel”.

Through measures to combat the virus, the chair of the IOC’s medical commission insisted the Olympic governing body and Games stakeholders in Japan had worked hard to create a “safe and secure environment for athletes and participants in the Games, but also the people of Japan”.

Ingmar De Vos, president of the International Equestrian Federation and an IOC member, revealed that the FEI has suffered like all sports due to the pandemic, with 1,200 international events cancelled and revenues down 60 per cent.

The federation responded by cutting costs and rethinking travel for sporting events and meetings on governance.

“For future events I think we learnt a lot… to have other ways to engage with fans by introducing new technologies and new ways to follow the sport by explaining it better,” he added, raising the prospect of innovations to deliver shorter formats for FEI events to grow appeal to mass audiences.

Al Kidd, CEO and president of the Sports Events & Tourism Association, also spoke about a shift in the consumption of live events via multiple platforms as new technologies are adopted. Evaluation metrics are widening from economic impact to traction on digital and social media.

Gabriela Ramos, assistant director general of UNESCO, said it was vital for sport to be part of policies to help countries, cities and communities emerge from the pandemic.

Santiago 2023 Pan American Games organizing committee CEO Felipe de Pablo and Juan Carlos Chamy, CCO and CMO, gave an update on what is billed as “the most important event in the history of our country”.

Progress was sustained through the pandemic, Chamy said. The 1,300-apartment Games Village was a significant infrastructure project, while work on new and renovated venues was hitting deadlines. Tenders are still to be awarded for services including food and beverage, broadcasting, ticketing and merchandising. A workshop later in the day, chaired by Dave Crump, CEO of Creative Technology - from whose studio Host City Americas was broadcast - enabled international suppliers to address questions to Chamy about these opportunities.

De Pablo said the Games for over 8,000 athletes from 41 countries will leave a positive legacy for Chilean sports. “We have a lot of tasks but we are confident in delivering and meeting the expectations of visitors, he said.

Another panel, co-produced with Orange Sports Forum, explored how to create legacies for large-scale events. Speakers included Erin Bromaghim, director of Olympic and Paralympic development for the Mayor of Los Angeles office, David Siegel, president and CEO of Los Angeles Sports Council, and Mickel Beckers, director of sports, culture and education for the Dutch city Rotterdam.

Rick Sleegers, head of international affairs for Orange Sports Forum, a platform for internationally promoting companies, organizations and institutes that have a connection with Dutch sport, spoke about creating a footballing legacy in China through the development of 50 Cruyff Courts over the next five years.

He also highlighted a grassroots football plan for India that involved a partnership between the country’s football federation and PSV Eindhoven and included “an exchange of coaches and sharing of knowledge expertise”. The FIFA U-17 World Cup in 2017 was part of the “masterplan for youth” to help generate potential football players.

With 13 professional sports teams in Los Angeles, more than any city in world, and the Olympics, Superbowl, FIFA World Cup hosting and MLB’s 2022 All-Star Game coming, Siegel said the city is “uniquely positioned to capitalize on this” from an economic, sustainability and accessibility standpoint.

Bromaghim said LA had been a game-changer for the Olympic movement in 1984 and was poised to do so again. “Sustainability and reuse are baked into our hosting model,” she said, adding that LA Mayor Eric Garcetti had pulled forward an Olympic legacy program to make sport and fitness more accessible.

The presentation by Paul Foster, CEO and founder of OnePlan provided interesting insights into how the company’s digital technologies for major events can unlock operational and commercial value.

Used by events and venues in over 50 countries and by the likes of Arsenal FC, FIBA and World Triathlon, the technology simplifies and improves event planning and management. “What excel is to an accountant, OnePlan is to an event planner,” Foster said, going on to explain how the fully interactive “digital twin of your venue” offers scenario planning, with 3D digital assets helping to sell commercial space.

Discussing the results of an audience poll that revealed divided opinions over what kind of electronic sports should be considered for inclusion in the Olympic Games, Archambault revealed that Riot was in dialogue with the IOC about this possibility, while Low said only virtual sports with physical activity could be included and Foster wisely said such matters should be left to the Olympic Movement to decide.

Monica Paul, executive director of the Dallas Sports Commission, gave a presentation on how the city had been transformed into a premier international sports destination from its hosting of the FIFA World Cup in 1994 to the Concacaf Gold Cup kicking off in July.

In a fascinating session on ‘The changing media landscape’, co-produced in partnership with NEP Group, Peter Hutton, Facebook’s director of sports partnerships, talked about how social media could harness the power to connect rights holders with fans in authentic ways. “Live sports need to be on platforms where younger audiences are… to create interesting experiences. It can really grow the sports for the future.”

Yiannis Exarchos, CEO of Olympic Broadcasting Services, said there was a shift among traditional broadcasters to embrace opportunities for ongoing engagement and interactivity with fans, which had led the IOC to create its own digital platform – the Olympic Channel. “It’s a great opportunity for all rights holders.”

Brian Sullivan, CEO of NEP Group, said technology had to catch up with changing consumer desires and trends and talked about the company’s cloud-based production aiding facilities in the US, Australia and The Netherlands. “It’s a very exciting time. There’s a huge amount of innovation coming in the next 5-10 years. The lesson is ‘try to reinvent yourself before you need to’.”

Day one of the conference wrapped with a session focused on organizing major events in the Americas in 2022 and beyond.

Niels de Vos, executive director of the World Athletics Championships Oregon22, said state support didn’t waver when the event was postponed a year: “They stood behind us because, like most people, they see events as a great celebration”.

Gary Meador, director of event services at Aggreko North America, a conference partner, said the pandemic challenges led the company to develop technologies to raise air quality. “We have spent a lot of time thinking how we can emerge stronger and help our host city partners and federations,” he said. “We have developed a significant amount of different power options for customers, different ways of helping event organizers meet their sustainability goals.”