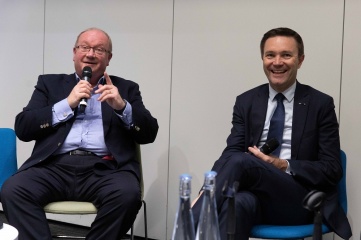 Host City, the greatest meeting of cities and sports, business and cultural events, made a triumphant return to Glasgow after two years online. With the theme of “Face to Face with New Realities”, the conference championed the value of major events against a challenging global landscape.

In his opening address, Paul Bush OBE, Director of Events, VisitScotland touched on a range of themes including community engagement, the creation of Scotland’s Event Industry Advisory Group, sustainability and the ongoing challenges being faced by the sector following the pandemic.

On the subject of digitalisation he said: “Digitalisation in events continues to accelerate – it has changed the way we work, live and do business, and has reshaped the events industry.  We are regularly seeing events putting attendees in control of their own experience, with innovation and creativity driving new dynamics and consumer satisfaction.”

Susan Deighan, Chief Executive of Glasgow Life said, “The future of events is extremely positive. Events of all kinds that bring people together have great benefits – but not at any cost.”

In his keynote address, Ivo Ferriani, IOC Member and President of GAISF, SportAccord, AOIWF and IBSF said: “In a cost-of-living crisis, a ticket is a luxury. We need to price events in a way that people can afford.

“We need to find a new balance between online and offline, and we need to do this quickly.

“Sport can be a driver of sustainable development.”

Georgina Grenon, Director of Environmental Excellence, Paris 2024 Organising Committee for the Olympic and Paralympic Games said “If you want sustainability to work, it has to be embedded in processes.” She highlighted how meals at the Games will have half the carbon weight of the average French meal. “Our suppliers are part of the solution.”

Energy supplier Aggreko has made a commitment to reduce its fossil fuel use by 50% by 2030. David De Behr, Head of Sales, Major Events said “We are doing a lot of good things providing green energy, but it has a financial impact.”

Another challenge is the decline in the young fans identifying as being passionate about sport. “Traditional sports need to connect with Gen Z fans,” said Alice John, Head of Economic Growth and Development Advisory at Deloitte’s Sports Business Group.

Teqball is one of the fastest growing sports, among fans who are increasingly concerned with purpose and values. “The high number of social followers is not something we want to show off,” said Gergely Murányi, Head of Diplomatic Relations at governing body FITEQ. “It means we have a huge responsibility around what we communicate.”

“The Olympics is the most challenging event of all,” said Yiannis Exarchos, CEO, Olympic Broadcasting Services and Executive Director, Olympic Channel Services. “With the IOC digital strategy, the vision is to use the Olympic platform to aggregate all information. Our vision is to bring together disparate activities on one Olympic journey.”

The metaverse is already in use in event planning and delivery, Exarchos said. “But the metaverse with live interaction could take five, ten or 15 years. The technology is not there.”

According to John Tweardy, Managing Partner - Olympic, Paralympic & Major Events Practice at Deloitte, this technology is developing rapidly. “LA2028 will have a fully functioning metaverse.”

“The world needs sport more than ever now,” he said. “We're putting the power and passion of Deloitte into sports, from the digital ambition to the field of play.”

“A lot has been achieved in making online events meaningful, said Andy Miah, Metaverse Council & Commission Member at the Global Esports Federation. “The challenge is now combining those things – integrating the physical and digital is critical.”

For major events to thrive, they need to demonstrate impact. “You have to ask yourself what the event will do for the community,” said Beng Choo Low, Secretary General, World Baseball-Softball Confederation.”

“For the 2026 World Cup, all 16 host cities are working with FIFA to create a lasting legacy for their communities,” said Mathew Ratner, Associate Director, Sports & Entertainment Tourism, Greater Miami Convention & Visitors Bureau Miami. “In Miami, we have proposed working with our local communities’ leaders and the US Soccer Foundation to celebrate the 23rd edition of the World Cup and either create, renovate or reimagine up to 23 spaces throughout the South Florida community that would be accessible to all.”

Ian Ward, Leader of Birmingham City Council said, “I know that hosting the 2022 edition of the Commonwealth Games is just the start for Birmingham” and that the event has ushered in a “golden decade of opportunity for the people, communities and businesses of Birmingham and the wider region.”

Nine years on from hosting the Commonwealth Games, Glasgow and Scotland are hosting the first Cycling World Championships. Presenting the project with Paul Bush, David Lappartient, President, Union Cycliste Internationale (UCI) and IOC Member said “Cycling is unique in that you can showcase the country. That’s key for us, that we showcase not only the race but the country.”

Lappartient applauded Copenhagen’s hosting of the Tour de France Grand Depart. “We had the same number of people watching the time trial on the streets that live in the city,” said Tine Eriksen Green, Head of Major Events, City of Copenhagen.

“How do you unite people? Through music and sport,” said Maxwell de Silva, Secretary General, National Olympic Committee of Sri Lanka. “By working together when you have an event you bring value to the community, we will continue to do that in the Indian subcontinent.”

“Events play a really important role in defining a city,” said Tim Briercliffe, Secretary General, AIPH – International Association of Horticultural Producers. “We are really focused on promoting the green city. Plants have a functional role to play in tackling climate change, and events provide an opportunity to think differently.”

David Stubbs, who was head of sustainability at London 2012, said “Alongside the climate crisis we are seeing a catastrophic loss of biodiversity. Every event can do something to support biodiversity.

“If you don’t get it right, you can lose sponsors.”

Other conference highlights included a presentation on solving the complex transports challenges of the next Winter Olympics from Stefano Manelli, Director of Citec Italy and Transportation Supervisor, Fondazione Milano Cortina 2026 , and a case study on the FIM World Supercross Championship (WSX) from Antony Warren of Supersize Live.