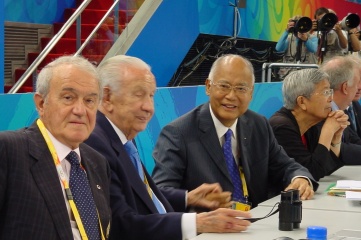 The Chinese Olympic Committee on Sunday confirmed the passing of IOC Honorary Member He Zhenliang.

An astute politician and diplomat, He played a pivotal role in returning China to the Olympic movement and also attracting the Olympic Games to Beijing. His great achievements earned him the moniker “Mr. Olympics” in China.

“The Olympic Movement has lost one of its most fervent ambassadors,” said IOC president Bach.

Before serving as IOC honorary member, He was IOC member from 1981 until 2010. He also served on the IOC executive board for three four-year periods and as IOC vice president from 1989 to 1993.

He played a vital part in helping Beijing win the right to host the Summer Olympic Games as an executive on the Beijing 2000 and 2008 bid committees.

Jizhong recalled He’s disappointment when Beijing missed out on 2000 by just two votes, telling China Daily "He said he felt he had let his country and people down, while in fact he'd done what he could to the utmost.”

The highlight of He’s career came at the 112th IOC session when Beijing’s bid committee won the host city election for 2008 under his leadership.

In an interview with HOST CITY magazine published on the eve of the Olympic Games in 2008, He said: “The Olympic Games will help the world better understand China and vice versa.

“If we can achieve such a goal through the Olympic Games, then the Games will not only leave its mark in the development history of China, in particular it will shine as a significant milestone in our diplomatic history. It will also be a symbolic major event in the history of international relations.”

These goals were certainly achieved, with the Beijing Games showcasing China to the world at a time of unprecedented economic growth.

IOC president Thomas Bach said “He was a man of culture and art. He was a true advocate of the social values of sport and of our Movement and I would like to pay tribute to the passion and energy he deployed over the years to fulfil his mission as an IOC Member in China.

“He also helped our Movement better understand his country, its people and outstanding culture.”

Speaking to HOST CITY in 2008 about the impact of hosting the Games, He acknowledged the improvements to infrastructure and material wealth in Beijing, but said that more valuable benefit was the cultural impact of the humanistic values of Olympism in China.

“The Olympic Games bestows hope and enlightenment to the world,” he told HOST CITY. “We need to make concerted efforts to build a bridge of tolerance, understanding, respect and friendly coexistence across different places, races, religions and ideologies.”

A keen sportsman, Mr He enjoyed swimming, playing table tennis, tennis, football, basketball and golf. A champion of sport and Olympic values in school curricula, He told HOST CITY his long term aspiration was for a greater role for sports within education in China.

The Beijing 2022 Olympic Winter Games Bid Committee also mourned He’s passing, praising his contributions to the Olympic Movement in China. The bid committee said it will endeavour to win the right to host the 2022 Games as a tribute to He.