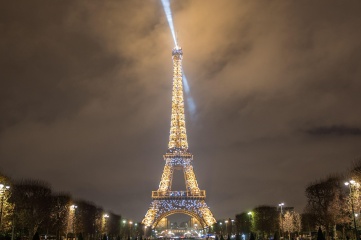 [Source: Global Sports Week] The world of sport will gather virtually this week for its annual Global Sports Week, which will take place across six future host cities of the Olympic, Paralympic and Youth Olympic Games.

Paris will again take centre stage, with the Eiffel Tower set to play host to the spectacular main event studio – the production base for a 30-hour livestream that will incorporate broadcasts from hub venues in Tokyo, Beijing and Dakar, and from ‘virtual hubs’ in Milan and Los Angeles.

An opening ceremony will be broadcast from the Eiffel Tower on Tuesday, attended by key figures and special guests, including Yannick Bestaven, skipper of IMOCA MAÎTRE CoQ, fresh from his victory last week in the legendary Vendee Globe solo round-the-world yacht race.

Throughout the week, a significant focus is expected to be placed on questions surrounding the Olympic and Paralympic Games.

Mayors Anne Hidalgo (Paris), Eric Garcetti (Los Angeles), Soham El Wardini (Dakar), and Giuseppe Sala (Milan), Vice Mayor of Beijing Zhang Jiandong and Governor of Tokyo Yuriko Koike will each give a message, presenting their vision for sport and the Games in the future of their cities.

The theme of this year’s Global Sports Week will be Reinvention in Action, following a year of unprecedented disruption, which has accelerated underlying trends impacting the world of sport.

As in 2020, the voice of the next generation will be represented by a group of Young Sports Makers, under-25s drawn from 26 nations, who will be tasked with challenging leaders and helping to shape discussions in line with their concerns.

Issues on the agenda include the rise of athlete activism and entrepreneurship, the new sport-for-health agenda and the emergence of new digital sports formats and revenue streams. Women’s sport, social justice and the climate emergency will also feature strongly.

NBA among coalition of partners

In total, more than 50 hours of content will be produced over 100 sessions throughout the week.

The event programme has been co-created together with 42 Global Sports Week partners, which include a number of the world’s leading sports rightsholders. Last week, the NBA became the latest to come on board as an official Proud Supporter.

Lucien Boyer, President and Co-founder of Global Sports Week, said: “The strength of this year’s programme is testament not only to the quality and impact of our inaugural edition at the Louvre. It also reflects a huge built-up energy in the world of sport right now, which is looking for expression.

“At the same time, we believe it is crucial that sport does not simply talk to itself. This year has shown us the extent to which sport is a function of societal and economic influences, while also being fundamental to the health of society itself.

“The mission of Global Sports Week is to bring people together across the boundaries of sport, business and society. We believe the diversity of this year’s line-up will lead to very exciting discussions, new partnerships and tangible outcomes that will shape the future of sport as we enter this new era.”