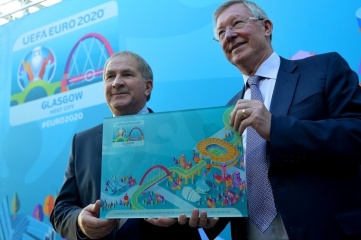 Football coaching legend Sir Alex Ferguson helped kick-off Glasgow’s UEFA EURO 2020 preparations at the official launch of the Host City branding in the Science Centre on the banks of the River Clyde on Tuesday.

"I was fortunate enough to play on that famous Hampden Park pitch as a young player, to watch the legendary Real Madrid side that came to Glasgow in 1960, and can look back fondly at cup final successes there as manager of Aberdeen," said Sir Alex. "I look forward to Hampden being a key part of a historic UEFA EURO 2020."

Glasgow is one of 13 cities that will play host to matches at UEFA EURO 2020 to commemorate the 60th anniversary of the championship.

Stewart Regan, chief executive of the Scottish FA, said "People make Glasgow and Glasgow will make EURO 2020. Now as a UEFA EURO 2020 host city venue, Hampden Park will welcome new heroes to Glasgow and help create the next chapter in the long and illustrious history of our game."

Hampden Park will play host to a Group Stage and a Round of 16 match for the championships.

Paul Bush OBE, VisitScotland’s Director of Events, said: “Scotland has demonstrated its capacity as the perfect stage for events on numerous magnificent occasions in recent years, and hosting these crucial UEFA EURO 2020 matches will build upon our sterling reputation as a world-leading host nation.

“We are delighted Hampden Park is set to play such a pivotal role during this landmark tournament, and look forward to further footballing history being made here in Scotland in 2020.”

Glasgow joins London, Rome, Baku and Bucharest in having revealed their host city logos, and ceremonies are scheduled to take place in the remaining cities – Amsterdam, Bilbao, Brussels, Budapest, Copenhagen, Dublin, Munich and St Petersburg – in the weeks to come.

"Glasgow enjoys a proud reputation as one of the world's great footballing cities," said Glasgow city council leader Frank McAveety. "The 'Hampden Roar' is legendary among visiting football fans from every nation. As a city, we recognise the value of football and major sporting events."

The UEFA EURO 2020 visual identity sees each of the 13 city logos feature a single iconic bridge from the city in question – acting as a symbol of connection between the various venues. Glasgow's logo incorporates the impressive Clyde Arc – affectionately known to Glaswegians as the Squinty Bridge – which spans the River Clyde.

In a message to Glasgow, UEFA President Aleksander Čeferin underlined the widely-held view that UEFA EURO 2020 would be "a unique and memorable tournament in a variety of different ways."

"What better way could there be to celebrate football," he added, "than to take the EURO final tournament for one single occasion to all four corners of the continent?"

Hampden Park hosted the classic 1960 European Cup final which saw Real Madrid beat Eintracht Frankfurt 7-3, and was the setting in 2002 for a wonder goal by Zinédine Zidane that gave Madrid UEFA Champions League success in the final against Bayer Leverkusen.

"This is a unique opportunity for Glasgow and Scotland to host matches as part of this prestigious championship," said the Scottish government's secretary for culture, tourism and external affairs, Fiona Hyslop. "It is likely to have a significant economic impact, not just for Glasgow, but for Scotland as a whole."