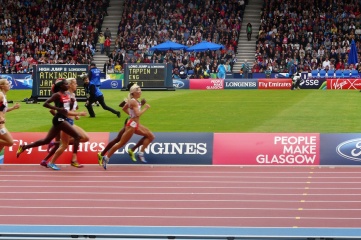 Glasgow 2014 created the biggest “buzz” of any sport event for the UK public according to the YouGov SportIndex Annual Report, while the FIFA World Cup did not make the top ten

The Glasgow 2014 Commonwealth Games has topped a UK ranking of the impact of the “buzz” of sports events in 2014, the SportIndex 2015 Annnual Report.

While the ranking does not discriminate between British and international events, those that were hosted in Britain or featured strong performances by British sportspeople inevitably created the biggest buzz.

According to the findings of the report, the FIFA World Cup in Brazil was only the thirteenth most positive sporting event of 2014 for British consumers.

The UK, like several other countries around the world, broke record viewing figures for the opening matches of the 2014 FIFA World Cup. However, audiences in the UK quickly lost interest after England’s exit at the group stage.

The authors of the report also cite the Luis Suarez biting incident as negatively impacting British interest in the World Cup.

The report found that Wimbledon created biggest buzz for an annual event, despite a below par performance by British star Andy Murray.

The FA Cup was the most widely enjoyed football event, with its highest buzz score ever.

The Formula One British Grand Prix had the biggest growth in buzz, on the back of British star Lewis Hamilton’s winning performance.

“What a great way to mark exactly six months on from an Opening Ceremony which launched a festival of sport and culture which people across the Scotland, the UK, Commonwealth and beyond could feel part of,” said Grevemberg.

“Six months on, the athletes of the Commonwealth who competed, the thousands of volunteers and staff who delivered the Games and the people of Glasgow and Scotland who were the warmest of hosts can feel hugely proud of their achievements, the pleasure they shared and the special place they've won in the nation's hearts."