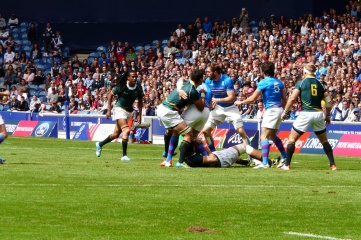 Scotland and South Africa battling it out in a packed Ibrox stadium (Photo: HOST CITY)

The Rugby Sevens tournament at Glasgow 2014 was named best Rugby event of 2014 by industry experts on Wednesday at Rugby Expo 2014.

The event beat off competition from the Women’s Rugby World Cup in August, hosted by France and the Super League Magic Weekend in May which featured seven matches and 14 elite teams competing at the Etihad Stadium, Manchester.

“Rugby Sevens as a sport was born in Scotland, so it’s really wonderful to see Glasgow and Scotland’s Commonwealth Games showcase for the sport recognised as the top rugby event this year,” said David Grevemberg, Chief Executive of Glasgow 2014.

Glasgow’s two-day extravaganza at Ibrox stadium saw 16 of the world’s top Rugby Sevens sides battle it out for Commonwealth Gold in front of 171,000 people – a new global record tournament audience for the sport.

Around 192 athletes contested 45 matches over two days of fierce competition which saw South Africa clinch Gold for the first time in Commonwealth Games history, beating New Zealand, winners of every previous Commonwealth Games Rugby Sevens Gold medal since the sport was introduced to the Games in 1998.

“The two days of Rugby Sevens at Ibrox were remarkable and memorable not just for the incredible sport but also for the sheer energy and enthusiasm generated by the crowds. We’re really proud to have played our part in sharing Rugby Sevens with new audiences,” said Grevemberg.

“This award is for the amazing athletes and the wonderful crowds which supported them as well as the world-beating experience of Rugby Seven they all helped create at Glasgow 2014.”

Rugby Expo 2014 is an important gathering for the industry which is supported by leading bodies including Premiership Rugby, RFU, SRU, WRU, Pro12 and Championship.

David Grevemberg, who is also the CEO designate of the Commonwealth Games Federation, is speaking at HOST CITY Bid to Win conference on 28th October about “Winning for the Future” alongside city event leaders from Beijing, Barcelona and Istanbul.