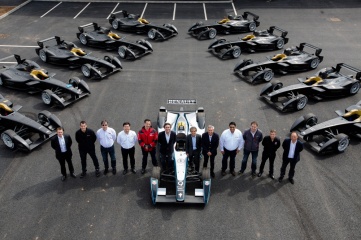 Formula E CEO Alejandro Agag, centre left, with team at the opening of the headquarters in Donington Park

Launching a new international event is not easy, especially when you are trying to reduce environmental impact while transporting materials all over the world.

“When we launched the championship we had many, many different challenges. We didn’t have any cars or any cities to race in,” Formula E CEO Alejandro Agag told HOST CITY at London’s Battersea Park at the close of the event’s first season.

“One of the most immediate ones was how we were going to take everything around the world to different venues.”

Formula E was about to put the logistics for the event out to tender when DHL stepped forward. “DHL said don’t do a bidding process, we want to be your partners; we really like the idea which fits very well with our ‘go green’ concept.”

“We pretty much bought into a concept that we felt was the right idea and vision at the right time with the right bunch of people. This was a very unique situation, to get involved as a major partner at such an early stage.”

Any rights holder would be pleased to have a major sponsor on board so early in an event’s development. “Of course DHL for us was an amazing partner to have – so we very quickly reached a positive agreement,” said Agag. “We especially liked the approach DHL had to minimise the carbon footprint of logistics.

“Any activity pollutes, and carrying all this equipment around the world does pollute, but there are ways of doing it that pollute less than others. I think really what we liked about the approach DHL was that they had a strategy in mind to minimise the carbon footprint of all the transportation of all the logistical operation of the Formula E Championship.”

The global transportation sector, of which logistics is a part, contributes 23 per cent to greenhouse gas emissions. “With that global footprint, we want to be part of the solution rather than part of the problem,” Asendorf said.

DHL was the first international logistics provider to set a measurable carbon efficiency target, to reduce carbon emissions in its operations by 30 per cent by 2020 compared to 2007. The company is making good progress in terms of achieving that target, according to Asendorf.

DHL also operates one of the largest fleets of trucks in the world and is looking into reducing its environmental impact.

“One of the technologies that we are piloting is electric mobility. This is where we thought Formula E is an interesting concept to support. We see a lot of strong potential for using electric vehicles in the delivery of shipments to the receiver, especially in inner city venues.”

Formula E is forming an alliance of stakeholders from various backgrounds to speed up the development of electric mobility technology.

“This resonated very well with our own targets and objectives in the area of sustainability and got us very excited about Formula E right from the start,” said Asendorf. “We want to make a positive contribution to the quality of life on our planet.”

From a point of view of fulfilling logistical requirements, the partnership has been a great success. “For us it has been fantastic because it really has been on time, everywhere – and it wasn’t easy, because we had a problem that no one else has,” said Agag.

In 2013, when Formula E was still in development, a new aeroplane – the Boeing 787 Dreamliner – had safety problems linked to batteries catching fire, which led to increased restrictions on flying batteries.

“It’s been challenging to transport all this equipment around the world, but DHL has been amazing.”

Around 200 tonnes must be transported from one Formula E host city to the next in 10 to 15 containers.

Battersea Park was the end of the road for the 2014/2015 season, after which all the materials for the race are stored at Formula E’s headquarters, a four-hour drive away at Donington Park.

“We are really happy to be in Battersea. It was the best choice for us because there has not been one single traffic jam caused by the Formula E race,” said Agag.

“To be in the heart of London and not have an impact on traffic is a major achievement for us.”

Other circuits presented bigger challenges. DHL’s Motorsport Deputy Managing Director Pierre Luiji Ferrari told HOST CITY “Miami was one of the most difficult, because we are really close to the city. I am sure the residents were not so happy, but it’s just for 24 hours.”

In Moscow, the circuit runs very close to Red Square, requiring roads to be blocked. Formula E is involved in designing the circuits but the ultimate decision is that of the city and transport authorities.

At the FIA World Motor Sport Council in July, Miami dropped from the Formula E calendar for the 2015/2016 season. Paris was added to the circuit, with the other cities confirmed as Putrajaya (Malaysia), Punta del Este (Uruguay), Buenos Aires (Argentina), Long Beach (USA), Berlin (Germany), Moscow (Russia) and London (UK). The host of one race on 16 March 2016 remains unconfirmed, with Mexico City said to be the most likely candidate.

“We are looking at another race in Asia – and we would like to race in the Middle East,” Agag said. “And we are looking at a race in Switzerland because there is a change in law which means we can race there.”

Cities around the world are expressing an interest in hosting Formula E.

“We have probably over 200 cities that have asked. When you tell them what you have to do, what it’s going to cost you, the implications and so on – then it filters down. There are some cities that really want it and others that are just asking to see how it works.

“Realistically we will add five or six new more races in three of four years.

“We’ve been in discussions with DHL to figure out the logistics; we want to reduce the carbon footprint of the championship and we want to go to new locations.”

Ferrari summed up the appeal of hosting Formula E. “A lot of cities apparently want to have the race because it’s attractive. It’s downtown; it’s zero pollution, no noise – it’s easy to receive in a city.”

And as for how many races DHL could cope with, doubling in size is logistically feasible. “We can do it, no problem. Until you reach 34 it’s possible – after that we have to start considering complications.”