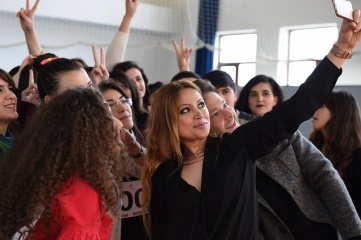 The first European Games will be broadcast in at least 47 countries, with five European broadcasters joining the party

More than one billion viewers worldwide will now be able to watch Baku 2015 on television.

“It is important that as many people as possible are able to share in the inaugural edition of the European Games this summer,” said Simon Clegg, chief operating officer of Baku 2015.

“With 130 days to go until the Opening Ceremony, these new deals are a great step in achieving that aim.”

The contracts include daily coverage commitments or a minimum number of sport competition hours to be screened during the Games.

Spain’s RTVE will screen the opening and closing ceremonies live, as well as providing extended competition coverage throughout the Games.

The network will also air a series of ‘Road to Baku’ programmes focusing on preparations for Baku 2015, while Sport TV will cover the Games on a dedicated 24-hour channel to be broadcast in their home market of Portugal, as well as in Mozambique and Angola.

RTV Slovenija, Latvia’s LTV and Estonia’s ERR have also committed to extensive coverage of the Games.

“These agreements will bring the inaugural European Games to tens of millions of viewers across Europe and beyond,” said Charlie Wijeratna, commercial director of Baku 2015.

“All of these broadcasters are Olympic rights holders for Rio 2016, and bring with them a wealth of experience in broadcasting major sports events.

“A key part of Baku 2015’s commercial offering has been our ability to secure broadcast agreements, and I’m delighted that we’re continuing to deliver on this objective. This announcement shows that we are continuing to raise the profile of the event across the continent.”

Baku 2015 will take place from 12 – 28 June 2015, featuring 16 Olympic sports and four non-Olympic sports. More than 6,000 athletes from across Europe will be representing their nations over 17 days of competition.

The BEGOC will organise and run the Games in cooperation with the European Olympic Committees (EOC), who awarded Baku the Games in December 2012.