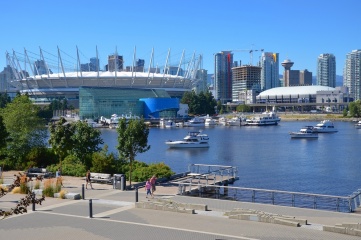 Vancouver's BC Place will host the 2015 World Cup final

Fifa, football’s global governing body, has insisted that the 2015 Women’s World Cup will take place on artificial turf in Canada, despite the threat of legal action from disgruntled players.

A group of 40 female footballers, including some of the biggest names in the women’s game such as the US’s Abby Wambach, Germany’s Nadine Angerer and Brazil’s Fabiana Da Silva Simoes, will file a lawsuit against Fifa and the Canadian Soccer Association on the decision to stage the tournament on the surface.

The players have claimed that the decision to force the teams to play on artificial turf is discriminatory as the men’s World Cup has always been played on grass. The complainants have also suggested that artificial turf can increase the risk of injuries and, on a basic playing level, can alter the traditional bounce and trajectory of the football.

Hampton Dellinger, the US law firm representing the group of players, set a deadline of September 26 for Fifa to open a dialogue with the complainants on the issue, but the governing body appears to be determined to press ahead with its plans.

“We play on artificial turf and there's no Plan B,” Tatjana Haenni, Fifa’s deputy director of the competitions division and head of women's competitions, told the Associated Press news agency.

Haenni is part of a Fifa delegation on a tour of the host cities of Ottawa, Edmonton, Montreal, Vancouver, Winnipeg and Moncton.

Hampton Dellinger said earlier this week: “A lawsuit is a last resort but one that unfortunately appears necessary and will be initiated in coming days. As the already drafted legal papers demonstrate, the players and their attorneys are prepared to put before a judge what we believe is a clear - and very unfortunate - case of gender discrimination.

“The discriminatory proposal of Fifa and the Canadian Soccer Association (CSA) to stage the 2015 Women’s World Cup on artificial turf, coupled with their refusal to discuss ways to fix the mistake, have left the players with no choice. It is now time to ask the courts to stop Fifa and CSA from forcing elite athletes to compete under game-changing, dangerous and demeaning conditions. World-class games cannot take place on second-class surfaces.”

Canada will host an expanded Women’s World Cup next year, with the number of teams growing from 16 to 24, increasing the number of matches from 32 to 52.